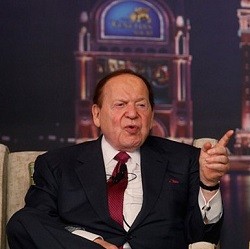 Casino magnate and multi-billionaire Sheldon Adelson fights with money. And he uses money to fight for the right to keep doing it. He has become very skilled at accomplishing his goals with money.

With that said, Adelson also doesn’t take loss well. His recent defeat in Pennsylvania, which came in the form of the legalization of online poker and casino games, was frustrating considering the millions of dollars he had donated and used in various ways to influence lawmakers to do the opposite. Adelson wants an outright ban on internet gambling, and Pennsylvania’s gambling expansion spit in the face of that idea.

It is no surprise, then, that Adelson is anxious to see the battle for unlimited political contributions in Pennsylvania move forward. His legacy depends on it.

Many states are wrestling with the idea of limiting political contributions. Voters tend to want it, but lobbyists and politicians want the campaign assistance while insisting those donations have nothing to do with their loyalty on issues. While this has been proven generally false when comparing politicians’ voting records in office to causes championed by their donors, politicians tend to steer clear of putting any limits on the money they can receive.

Pennsylvania took a different avenue, however, and banned large campaign contributions from gambling entities years ago. Those involved in the local gambling industry are forbidden from donating to any political campaigns of elected officials, though most other businesses are not held to the same standard and lobbying remains legal.

Adelson does have an interest in Pennsylvania, as his Las Vegas Sands company owns Sands Bethlehem, one of the largest casinos in the state. And he wants greater leniency to be able to influence state lawmakers. His inability to do so with enough power to stop the online gambling bill from passing this year prompted Adelson to try another route.

A shareholder in Sands Bethlehem by the name of Pasquale Deon Sr. is currently suing the state for the right to donate as he (or Adelson) chooses, and the lawsuit claims that the ban in place infringes on his right to free expression, free association, and equal protection under the US. Constitution. Since then, a beneficiary of the Lady Luck Casino trust joined Deon in the case. Essentially, they claim that non-gambling businesses have greater influence with the ability to contribute to state politicians on an unlimited basis. The plaintiffs call that corruption.

Adelson has been suffering embarrassments and losses of late. The aforementioned legalization of online poker and casino games in Pennsylvania was a certain defeat, especially noting that lobbying the state representative of the district which hosts the Sands Bethlehem voted for the gambling expansion and online gaming bill.

During a recent trip overseas, he was on a ferry from Macau to Hong Kong when he fell and fractured three ribs. And though Adelson did claim somewhat of a victory when President Donald Trump announced the relocation of the US embassy in Israel to Jerusalem, the move is delayed for an indefinite period of time, and the media backlash against Adelson has been somewhat harsh. While he did not make the decision, he has long lobbied Trump and various members of Congress to influence pro-Israel actions and decisions.

Of course, there is also RAWA. Many of the members of Congress who had been considered friendly to Adelson’s desires with regard to online gambling have failed to produce any results with regard to the ban that Adelson hoped to implement. In addition, some of them, like Representative Charlie Dent of Pennsylvania, have announced their intention to retire from Congress next year due to political conflicts. Adelson is losing Dent and others, including now-US Attorney General Jeff Sessions, who had to recuse himself from anything gambling related due to the uncovering of his close ties to Adelson.

To put it kindly, Adelson is not getting any younger, and he wants to secure his legacy, part of which is to stop online gaming from spreading across the United States and cutting into his casino profits. It can be expected that Adelson will get even more serious about getting what he wants and cementing his legacy in the coming years.