Americas Cardroom Wants to Sponsor the Next Moneymaker 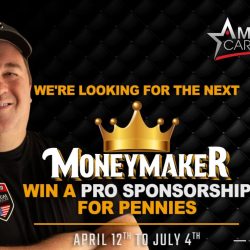 Let’s face it. There can only be one Chris Moneymaker. His 2003 WSOP Main Event victory – winning $2.5M from an $86 online poker satellite via PokerStars – changed the game in ways no one in the industry could have predicted prior to the turn of the century. Moneymaker holds a unique place in poker history.

So, when Americas Cardroom says it wants to find the next Moneymaker, it’s a toast to the man himself and a chance for a man or women to win their way on to poker’s world stage. Obviously, much of it will be up to the player himself or herself, but ACR wants to put someone on that path with a nice starting bankroll.

It just so happens that Moneymaker signed on with Americas Cardroom earlier this year as the site’s most high-profile ambassador. That helps with the promotion.

Big Sponsorship Up for Grabs

This is a unique promotion for Americas Cardroom. It is all to celebrate Chris Moneymaker as the newest ACR Team Pro.

The basic premise is that anyone can win, but it’s going to take some effort to earn it. Americas Cardroom is giving every player the chance to become the “next Moneymaker,” as the qualifiers cost only one penny. The ultimate champion will win a sponsorship package worth $105K.

That package will give the player $25K in cash, $40K in buy-ins for live tournaments, and $40K in buy-ins for online events. ACR will work with that player to decide which online and live events she or he will play, but ACR will also make all travel arrangements when necessary.

The player will agree to wear the Team Pro patch at every live event, along with any publicity events, photos, and branded interviews.

Anyone who wants to participate may play in any of the specially-marked tournaments from April 12 to July 4. All buy-ins for these events will be $0.01, and there is no limit to the number of qualifying tournaments a person can play.

The tournaments will run for the 12 weeks as follows:

Registration only opens one hour before the start time and only permits one hour of late registration. These are freezeouts and turbo structures.

At the end of each tournament, the top 100 players will earn points on the weekly leaderboard. At the end of each week, ACR will record the top five finishes for each player. The top 30 points-earners each week will advance to the finale. That ultimate deciding tournament will offer multiple starting days, beginning on July 11.

Players can only win one entry to the July 11 finale. Any subsequent qualifications will be discarded.

The qualifiers are open to all ACR players.

💰Have you checked out our Chris Moneymaker challenge? 👀