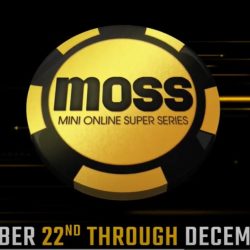 November seems to be the perfect month for micro and mini buy-in online poker tournaments. Americas Cardroom is ready with the Mini Online Super Series (MOSS), one of the most popular of its OSS variations.

The Winning Poker Network actually runs MOSS across all of its skins, including Black Chip Poker, though Americas Cardroom remains the dominant one with American players.

This one, which will run from November 22 to December 7, will offer only mini buy-in tournaments. And across the 167-event schedule, ACR guarantees at least $2.5 million in prize pools.

Let’s get to the details.

This edition of the Mini Online Super Series will kick off this Sunday, November 22 and run through December 7. Just as many parts of the United States – and world, actually – enter another form of lockdown to fend of the coronavirus pandemic, MOSS steps in with cost-effective online poker action.

The vast majority of the events are Hold’em, but there are a fair amount of Omaha events and even a little Stud action. The formats vary greatly, with six-max and 8-max tables, turbos and mega stacks, and a whole lot of progressive knockouts (PKOs).

Americas Cardroom lists the full schedule, which kicks off this Sunday with Event 0, a $16.50 buy-in No Limit Hold’em tournament playing 8-handed and with a $125K guarantee. A look at the entire Monday, November 23rd schedule provides an example of the variety of action available every day:

Two Main Events, Better Than One

ACR is rarely content with offering just one Main Event, so this iteration of MOSS offers two of them. Both offer $250K guarantees and multiple playing days:

There are multiple qualifiers leading up to the Main Events. ACR lists the primary mega satellites (and freerolls into them) on this page of its website.

We Will Talk About Fight Club

Anyway, there are two Fight Club PKO tournaments in this MOSS series. Each one offers 20 flights at just $9.90 each, with $6 of that going to the bounties and $3 to the prize pool. Players receive 50K starting chips but blinds increase every seven minutes, so the action will be fast and furious. Each flight plays 19 levels.

Players who survive a starting day will return for Day 2, which plays to a final table. The next day, that final table plays to a winner.

Did we mention each Fight Club offers a $25K guarantee?

Here are the basics, with further details available at ACR: