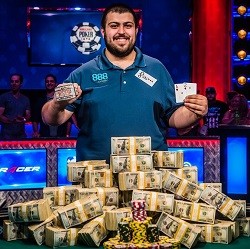 Blumstein with 888 and WSOP prominently displayed

In the middle of the July heat in Las Vegas, a 25-year-old poker player from New Jersey won the World Series of Poker Main Event. Not only did Scott Blumstein play through a field of 7,221 players, all of whom paid $10K to play, he won $8.15 million for winning the biggest and most prestigious poker tournament in the world.

But opening New Jersey sites 888poker and WSOP in New Jersey (or the latter in Nevada) won’t tell that story. In fact, Blumstein’s story and winner photo are not even displayed on the sites. There is no obvious association between WSOP’s online poker site and the winner of its largest live tournament of the year, nor is there one with 888poker, the patch Blumstein wore as he played through the final table and won.

I have no words. The support from everyone means the world to me. 3 days of much needed rest and then back to work. #simchanged

This is one of the most blatant cases of a missed marketing opportunity that the poker world may ever witness. And in the United States, where online poker has been losing popularity since Black Friday and trying – mostly unsuccessfully – to emerge as a regulated game in more than three states, this missed opportunity is even more staggering.

Blumstein fit directly into the demographic that most online poker operators target, a male in his mid-20s. Better yet, he is a college graduate hailing from Temple University, a young man who finished his education and then took to the online poker tables to make a living. The accounting degree he holds is even more of benefit because it exemplifies the importance of the math and skill components in poker, not to mention the ability to correctly manage his massive winnings.

Poker was a way for the university student to make money, playing at poker rooms in New York and Pennsylvania when studies allowed the time off. He cashed in some tournaments and then put more time in to improve his game after he graduated. By the time he moved back to his home state of New Jersey, he was able to claim his first tournament win at the 2016 Borgata Summer Poker Open in Atlantic City. He won a $500 buy-in event for nearly $200K.

Feeling extremely grateful and lucky to be living out a dream of mine for quite some time now. Hoping to run great and play better. #due

One of the ways Blumstein improved his game was to play online in the most successful regulated online poker market in the US – New Jersey. It is the state that hosts numerous online poker sites and oversight from the Division of Gaming Enforcement, an entity that has nearly mastered geolocation, player identification, and an ever-improving industry. Blumstein credits his opportunity to play online on those regulated sites with giving him the skills needed to win the Main Event.

He even told the Associated Press after his win, “The best way to get better at anything is through repetition and practice. When you play online in New Jersey, it’s hard for any live pro to see even close to the amount of hands I’ve probably seen in the last two years.”

Blumstein was a walking, talking, educated, enthusiastic spokesperson for online poker in New Jersey and in the United States.

Still in shock & I'm not sure when it will sink in completely but for right now I'm just enjoying the moment. All the support means so much!

888poker worked a sponsorship deal with Blumstein at the WSOP Main Event final table, which resulted in the player wearing the logo on the live television and online broadcasts of the action, as well as in all of the winner photos. 888poker operates in the New Jersey market.

The tournament itself was a production of the WSOP, which has online poker sites in Nevada and New Jersey.

The two sites had ample opportunity to collaborate with each other and with Blumstein to market the winner as a product of legalized, regulated online poker. There was the potential for television appearances and interviews with mainstream magazines and websites. There were innumerable chances to run online poker promotions with Blumstein as an example of what practice online can do for a person’s overall poker abilities. There could have been live poker tournaments in New Jersey featuring Blumstein and others like him who make a living in the poker world.

Others could have also worked with Blumstein. The Poker Players Alliance could have reached out to Blumstein for assistance in promoting regulated online poker in places like Pennsylvania and New York, where legislatures are considering bills to legalize the games. His age, education, and poker journey could have worked together to paint the perfect picture of a successful and regulated online gambling environment that benefits New Jersey and could work in the favor of other states as well.

Blumstein was – and still can be – a poker ambassador in a market that is struggling to stay viable, much less grow and expand.

It should be noted that Blumstein was not consulted for this article. It is possible that he wanted nothing to do with said promotions and opportunities. And it is also possible that organizations and operators did try to work with Blumstein on deals that simply didn’t work out for the parties involved.

From a distance, however, it seems that Blumstein’s history with poker and his massive victory this year could have been a huge advantage for the online poker industry in America, if only someone had the foresight and diligence to make it happen.