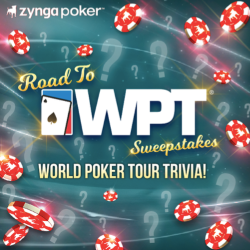 The two are now joining forces for a giveaway that will reward daily Zynga players and send them straight into a poker setting at the WPT Seminole Hard Rock Poker Showdown in Florida.

The opportunity begins on Friday, February 14, and it runs through March 6, 2020. All Zynga Poker players who participate in and complete daily in-game challenges will be in the final drawing for a trip to a major WPT event.

In fact, there will be 15 winners of all-expenses-paid trips to Hollywood, Florida, where they will play in the $3,500 buy-in WPT Seminole Hard Rock Poker Showdown Main Event.

All information can be found in the new Event Challenges section of Zynga Poker.

The 15 winners will receive transportation, accommodations, money for expenses, and a complimentary buy-in to the WPT Seminole Hard Rock Poker Showdown.

All of the winners will also receive an exclusive training workshop prior to the tournament. WPT commentator and poker champion Tony Dunst will be the instructor. Dunst has more than $3.8 million listed in live tournament earnings to date, which include a win at the 2013 Caribbean Poker Tour Main Event and a World Series of Poker gold bracelet from the 2013 WSOP.

Dunst commented, “Zynga Poker is a great platform for anyone to learn the ins and outs of Texas Hold’em’s rules, strategies and community. The sweepstakes winners will have a wonderful opportunity to play in one of the best WPT events of the year at Seminole Hard Rock. Zynga Poker has given these players the practical tools to succeed, and I look forward to sharing tips I’ve learned as a WPT champion to accelerate their respective learning curves.”

Zynga President of Publishing Bernard Kim added, “Zynga Players love competition, and now they’ll get to put those skills to the test at an elite, high-stakes tournament.”

The WPT Seminole Hard Rock Poker Showdown is the second-to-last stop of the World Poker Tour’s Season XVIII main tour that wraps up at the end of May.

The entire Seminole Hard Rock Poker Showdown series begins at the Florida casino on April 16 and culminates in the WPT Main Event from May 1-5. That $3,500 buy-in tournament will offer two starting days (May 1 and 2) with reentries allowed.

And as was just announced by the tournament organizers, the Main Event will offer a $3 million guarantee on the prize pool.

The 2020 @WPT Poker Showdown schedule has been released on https://t.co/uj9cS5aG3m! The series starts on April 16th and runs thru May 5th! Series is highlighted with 48 trophy events and a $3M GTD Championship Event! Schedule can be found by clicking here: https://t.co/bMadmNd33I pic.twitter.com/xVziJGstSW

The tournament will play on through May 5, the day that will determine the final six players to go on to the final table. Those players will then collect sixth-place money for their finishes to that point, ultimately then traveling to play the final table at the HyperX Esports Arena in Las Vegas on May 29. The arena is located at the Luxor and provides a stage and audience area, where the action will be filmed for television episodes on Fox Sports Networks.

Free-play poker action on Zynga Poker could turn into a casual player into a WPT champion via the World Poker Tour Sweepstakes.