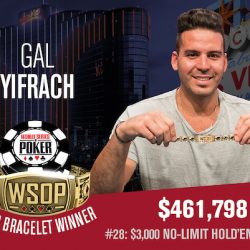 Gal Yifrach was one of three players to win WSOP bracelets on Saturday.

Saturday was another busy day at the Rio with three events awarding bracelets. Gal Yifrach dealt a stunning blow to James Mackey heads-up to take the $3k Six-Max title. Meanwhile, Steven Albini survived a killer final table and a tough challenge from Jeff Lisandro to win the $1,500 Stud Event. Lastly, Ryan Bambrick dominated for much of the final table en route to winning the $1,500 PLO Event.

Yifrach had a huge lead over his remaining opponents while Gary Hasson came in as the short stack. Hasson found a timely double in early play but was unable to sustain his run. Ultimately, he finished in third place after his Ks-10c failed to outrun the Ad-6d of Gal Yifrach.

Yifrach led James Mackey by almost 2 to 1 at the start of heads-up play but Mackey managed to pull the stack back to even prior to the penultimate hand. Unfortunately, a cruel river card cost Mackey a bracelet.

At the turn, Mackey shoved on a board of 8d-6h-2c-2s with pocket tens. Yifrach called with As-8d and it looked like Mackey would double to all but lock up the bracelet. However, the river dealt a crushing blow as the 8c hit to give Yifrach the hand and the bracelet.

This was a crushing defeat for Mackey who was seeking his second career WSOP bracelet. Instead, he has to settle for the $285,377 runner-up prize.

The final table of the $1,500 Seven Card Stud Event was a star-studded affair (pun intended). Some of the best stud and mixed games players in the world made this final. Four bracelet winners earned a spot in the final including Michael Moore, Frankie O’Dell and six-time WSOP bracelet winners Chris Ferguson and Jeff Lisandro.

Other notables making the final included Esther Rossi, Katherine Fleck, and Paul Sexton. Fleck and Rossi were both looking to become the first woman to win a WSOP bracelet this summer. Unfortunately, neither were able to do so as Rossi finished 8th and Fleck third.

If there is anyone that poker fans like to anti-rail, it is Chris Ferguson. “Jesus” was the chip leader at one point at the final but he ran into a streak of bad luck four-handed and that’s where he finished. His aces-up were no match for trip sevens from Steven Albini.

Jeff Lisandro made heads-up play in this event against Steven Albini with Albini holding less than a two big bet lead. The pair swapped the chip lead several times but soon the limits went up to the point where both had just about 10 big bets in their stacks.

A couple of hands went Albini’s way and he jumped to a 4 to 1 chip advantage prior to the final hand. In the final hand, Lisandro had his chips in with Qc-6h-2h against Ah-10c-9s for Albini. Lisandro was unable to improve his hand but Albini caught a pair of tens on sixth street to take the hand and his first WSOP bracelet.

Steven Albini had a handful of WSOP cashes over the years but he never made a final table until this event. He made the most of his first final table run, taking down the $1,500 Stud bracelet and $105,629.

Ryan Bambrick took a massive chip lead into the final day of Event #30, $1,500 PL Omaha. He had more than a 2 to 1 lead over the rest of the field with 13 players remaining. Other notables that started the day still in contention included Victor Ramdin, Lexy Gavin and past bracelet winner George Xu.

Ramdin and Gavin fell prior to the final table while Bambrick retained his massive lead. With six players left, Sampo Ryynanen went on a run to take the chip lead and build a 3.6 to 1 lead over Bambrick and the rest of the field.

Three-handed Bambrick scored a huge double against Ryynanen and later took another massive pot to retake the chip lead. After knocking out Tim McDermott in third place, Bambrick took more than a 2 to 1 lead into heads-up play against Ryynanen.

Bambrick’s momentum was too much and Ryynanen was ground down to just ten big blinds. Ryynanen put those chips at risk with a pair and gutshot straight draw against an overpair for Bambrick. Bambrick turned queens-up to lock up the hand and the bracelet.

Prior to this event, Ryan Bambrick only had about $46k in career earnings, much of which came during the 2018 WSOP. This was his fourth cash of the series and this time around he earned his first WSOP gold bracelet. In addition, he earned $217,123.

Ryan Bambrick build up an online roll, took a leave of absence from his day trading job, came to Vegas to play a full WSOP schedule and won a bracelet in his fourth cash of the series.