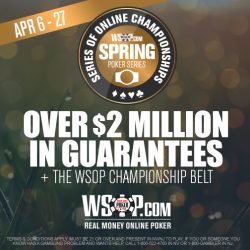 Poker players around the world are waiting for more information about the 2021 World Series of Poker in Las Vegas, as well as the summer of online events and the WSOP Europe. This announcement, however, was not about that.

This is just for the small US market in which WSOP.com operates. It is, once again, offering the Spring Online Championships to players located within the Nevada and New Jersey state borders. And though Delaware players are often left out of WSOP Circuit ring and WSOP bracelet events despite sharing tables with the NJ and NV sites, Delaware is included in this Spring Online Championships series.

The numbers should be solid for the tournaments with players from three states, though the events compete (in Nevada and New Jersey) with the month WSOP Circuit events.

The 2021 Spring Online Championships offers 75 tournaments in total, as well as more than $2M in guarantees and a WSOP championship belt.

WSOP.com announced the series on April 2, and it started on April 6. The tournaments thus far garnered impressive turnout.

The full schedule is listed on the WSOP promotions page and starts with three tournaments per day but revs up toward the last weekend. There will be six events on April 24, six on April 25, three on April 26, and four on April 27.

Those looking for higher buy-ins have more opportunities, with Events 23, 40, 46, 66, and 73 offering $1K buy-in High Roller events. Those tournaments offer the biggest guarantees, too:

The largest guarantee belongs to the Main Event, the one that will offer a championship belt to the winner, along with the allocated prize money.

JUST ANNOUCED🔥 Spring Online Championships April 6-27. Over $2 Million in GTDs and a chance to win the WSOP Championship Belt awarded at the Main Event on 4/25. This Championship Event is a CAN’T MISS.
NV: https://t.co/n6aWKtz19y
NJ: https://t.co/bVz6ViNLIQ pic.twitter.com/aU669GDJkY