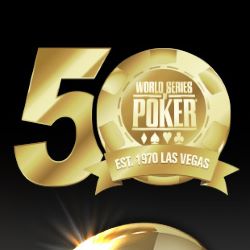 One of the numerous ways that the World Series of Poker is celebrating its 50th anniversary this year is on the calendar for Saturday, June 29. The First Fifty Honors is a gala and awards ceremony to celebrate the most memorable players and poker moments from the last – or first – 50 years of the WSOP.

The event was first announced in mid-May, at which time two tasks were put on the table. The first was for poker fans to vote online in seven categories of players and moments in WSOP history, and those winners will be revealed at the gala.

The second task was given to 26 members of the poker industry the chance to vote for the top 50 greatest poker players of all time. And the top 50 were revealed on June 27.

It was a daunting task for any member of the poker community to choose the 50 best players in the history of the game. And that task was handed to just 26 “poker media and industry stalwarts.”

They were given a list of 200 names by WSOP staff, though voters could write in any names they felt were missing and deserving of being listed.

When all votes were tallied, a total of 173 players received votes, meaning at least 27 players on the WSOP’s top 200 list received no votes.

The ones with the most votes, ones now considered the “50 Greatest Poker Players,” are as follows, in alphabetical order:

The vast majority of the players on the list are American and male.

(Author’s note: It would be interesting to see the gender, ages, and nationalities of the members of the voting panel.)

Seven awards will be handed out by hosts Lon McEachern and Norman Chad throughout the evening of the gala, though the winners have been determined. This happened when the public was invited to vote from May 15 to June 15 online in these seven categories:

–Most Likely to Succeed

There were options from which to choose in each category, and voters had to choose from those options given. They were listed out in this article when first announced.

For all former WSOP gold bracelet winners and invited guests, the Brasilia Ballroom at the Rio Convention Center in Las Vegas will close its poker action for the night on June 29 to celebrate the WSOP’s 50th anniversary.

The doors will open at 8pm that night and start with a cocktail reception followed by dinner and then the awards presentation.

Bracelet winners and VIP guests can pick up their tickets at the Rio.

WSOP Executive Director Ty Stewart noted, “It is important we take time out to honor the WSOP’s first 50 years and pay tribute to those that paved the way for where we are today. We look forward to getting the poker community together on Saturday and commemorating 50 years of the World Series of Poker.”