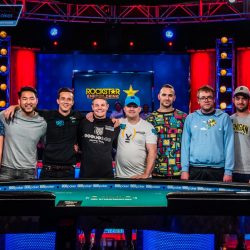 Day 7 of the 2018 WSOP Main Event kicked off on Wednesday with 26 players looking to make the final table. A long journey started for these players last week as they were part of a field of 7,874 hopefuls that were all looking to take down poker’s greatest prize.

The final table was set close to midnight Vegas time and it appeared that Michael Dyer would take a monster lead into the final table. However, things can change in a single hand in NL Hold’em and the complexion of this Main Event changed in one of the craziest final table bubble hands we’ve ever seen.

Heading into the unofficial final table, Michael Dyer was running away with this thing as he had more than double the rest of the field. With about 13 players left, Dyer began going on a rush and grew his stack by about 40 million.

He was at 96 million with 12 players left and cracked the 100 million mark during the unofficial final table. His highest point was 111 million but he slipped back down to 109 million prior to the final hand of the night. It was one for the record books.

The hand that set the final table was one of the craziest hands in Main Event history. Nicolas Manion bet 1.5 million pre-flop, followed by a call from Antoine Labat. Yeuqi Zhu then shoved for 24.7 million and once action folded back to Manion, he shoved himself for 43 million. Labat was third in chips at this point and it seemed likely he would fold, but incredibly, he made the call as well and we soon found out why.

Nicolas Manion turned over pocket aces and Labat and Zhu looked on in horror after they both turned over pocket kings. Zhu had to catch running straight cards while Labat had live club outs. The flop fell Jd-7c-4c and Zhu was effectively eliminated. The turn 3s left Labat drawing dead and incredibly, Nicolas Manion moved up to 112 million in chips and the chip lead heading into the final table.

With Zhu’s elimination, the final table is now set and there are two big stories left at this final table.

As we mentioned yesterday, John Cynn was looking to improve his run from 2016 when he finished 11th in the WSOP Main Event. He continued to play phenomenally on Wednesday and managed to move up the counts.

John Cynn fell just short of the Main Event final table in 2016 in 11th place. He's here on Day 7 and soaking up the experience for a second time pic.twitter.com/BM15zabNEe

Eventually, Cynn found himself at the unofficial final table of ten and in third chip position. En route to the final table, Cynn busted Konstantin Beylin in 14th.

Cynn will start the final table fourth in chips with 37.07 million. He will start with 61 big blinds.

The last player to become a two-time WSOP bracelet winner was Johnny Chan and only four players in WSOP history have won two or more Main Event titles. Joe Cada could become the fifth player in history to win two Main Event titles and the first to do so in the modern era of poker.

Cada won the 2009 Main Event and now heads into the final table in sixth chip position. He has 23.67 million in chips. He’ll start with 39 big blinds. Cada is also looking to become the first multi-bracelet winner of the 2018 WSOP. Cada won a bracelet earlier in the series. If he is somehow able to take this title, it will be considered the greatest accomplishment of the modern era of poker and perhaps the greatest in WSOP history.

Manion and Dyer More Than Double Everyone Else

Nicolas Manion will take the chip lead into the final table on Thursday. Michael Dyer is right behind with just 2 million less. On the other end of the spectrum, Antoine Labat is left with just 8.05 million, or about 13 big blinds. Artem Metalidi is also near the danger zone in chips and needs to get something going early.

The remaining players will be in ok shape chip wise when the final table starts but they will have to make some moves in order to continue a run toward the bracelet.

Below are the chips counts when play resumes on Thursday: