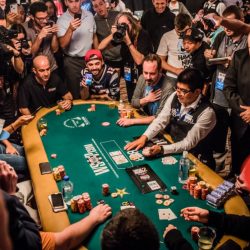 Things are finally getting serious at the 2018 World Series of Poker Main Event as the money bubble has officially been reached. On Saturday, the Main Event field was thinned down to just 1182 players with each remaining player guaranteed at least $15,000.

During the day, several big names fell short of the money bubble including Phil Hellmuth, Chris Ferguson, and Jason Mercier. By the end of the day, the money bubble and those players will return on Sunday to try and start their journey towards the final table.

By the end of Day 3 play, there was near deadlock atop the leaderboard with In Sun Geoum and Frank Flowers with 1.69 and 1.62 million in chips respectively. Big names near the top of the leaderboard include Eric Froehlich, Ben Yu, Chris Moorman, Dan Heimiller and Phil Ivey.

Phil Hellmuth Among the Big Names Falling Short of the Money

Jason Mercier was among the early players to fall n Day 3 action. Earlier in the tournament, Mercier almost seemed content to blind out of the tournament in lieu of cash games. However, he came and took his seat, yet still didn’t walk away with any cash. Back to the cash games!

Multiple prior Main Event champions fell during the day. Chris Ferguson fell short of another WSOP cash and hit the rail well before the money. He is presently 20th in the 2018 WSOP Player of the Year running and will have to chase the POY title in other events. Greg Merson also hit the rail earlier in the day.

Phil Hellmuth was looking to salvage his 2018 WSOP in the Main Event but also could not manage to make the money. Hellmuth nursed a short stack for much of his remaining time in the Main Event and found the perfect spot to double-up with As-Kc against the Ad-9d for Jans Arends. The flop and turn missed both, but the river 9h ended the 14-time WSOP champion’s run well short of cashing.

Bubble Bursts – All Remaining Players in the Money!

As expected, the field slowly dwindled down under 1,200 and slowly approached 1,183. As is customary, there was a slew of doubles near the bubble and the elimination of Sam Taylor in 1,184 took the field to the stone bubble.

When the stone bubble hit, WSOP officials announced an unscheduled break to color up chips. This was met by a chorus of boos throughout the tournament room. During the break, Kevmath took the following photo:

It didn’t take long to bust the bubble after the break as multiple people were all-in. Ross Mallor managed to double with Ac-Kc against the pocket queens of Ben Cade. Matthew Hopkins was not as lucky.

Hopkins was all-in with Ac-5h and called by the Ad-Qs of Bryce McVay. The board failed to produce a five for Hopkins and he became the official bubble boy of the event. Alan Wildmann, aka Hotted in the gaming world, was among those to cash in the Main Event and posted the following:

As is customary in the Main Event, Hopkins did not leave empty-handed. He received an entry into the 2019 WSOP Main Event. While not what he hoped for, at least he can come back next year without having to come up with another $10k.

Here’s another video of the bubble period and Hopkins getting his seat:

With the bubble burst, the remaining 1,182 players have earned at least $15,000. Once the bubble burst, players bagged for the night and will return on Sunday to begin the march towards the final table. Action will be hot and heavy early as the short stacks try and either double-up or hit the payout line to get their cash.

Below are some tweets from some of the bigger names to cash in this year’s Main Event:

Finishing the day as chip leader is In Sun Geoum with 1.69 million. Frank Flowers is right behind with 1.62 million. Eric Froehlich also has a top ten stack with 1.23 million.

Sunday will be moving day for a ton of players and by the end of the day, we will get a better idea of the players to watch this week as we navigate to the Main Event final table.