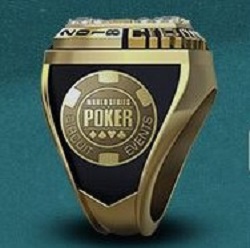 The World Series of Poker just announced its summer 2019 series dates before Christmas, which excites poker players and fans who cannot wait to get to Las Vegas to play or log on and follow the action.

However, the 2018/2019 WSOP Circuit has been in action since August 2018 and will continue after the holidays through to May 20. Those who want a taste of the World Series of Poker with more affordable buy-ins and locations throughout the United States can get in on the Circuit at any time, as there are events nearly back-to-back on the schedule.

The 2018/2019 WSOP Circuit has reached its halfway point. Find out who has already locked up a seat to the 2019 Global Casino Championship.
https://t.co/tfn0CqRzsf pic.twitter.com/1gn7FSu3WT

Each stop on the WSOPC offers 13 tournaments, which start as low as $250 for buy-ins and top out at $2,200 for the High Roller at each stop. All tournaments have guarantees on the prize pools, and they all offer at least one reentry. Most stops also offer ladies-only events and ones dedicated to senior players. The Main Event at each stop is a $1,700 buy-in affair with varying guarantees, four days of play, one reentry allowed per starting flight, and a gold WSOP ring at the end of the rainbow.

The exception was the first-ever online WSOP Circuit event, which was an online series of 13 tournaments with tournaments ranging from $215 to $1,000 for the High Roller. The Main Event required only a $525 buy-in, played out in one day, and its guarantee was only $200K.

In the five months of the current season, these were the winners and Main Event stats:

Bartlett, TN's Kevin Johnson takes down the Main Event @WSOP Circuit at @IPBiloxiPoker for his first career ring. Johnson, 28, collects $127,319 and a seat into the Casino Championship. https://t.co/21KJCgIrtk pic.twitter.com/Xz6LX5Znm3

Much More Circuit to Go

That was a lot of poker played in the first half of the season, but after just a couple of weeks off for the holidays, the World Series of Poker Circuit crew will be at it again on January 2 to kick off the second half of the events. It will all lead up to the WSOP in Las Vegas.

The last stops of the season do not yet have finalized schedules, but players can expect that they will be released within the coming month or so.

Who's ready for the 2019 WSOP? Start planning with an early look at some flagship events already confirmed:https://t.co/I3HoFxANCy
WSOP will be May 28-July 16, 2019
Main Event start dates July 3, 4 & 5 pic.twitter.com/1bZvrUCx8M