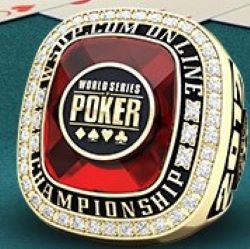 The World Series of Poker has been one of the last holdouts amidst coronavirus shutdowns. As tours like the World Poker Tour, Heartland Poker Tour, and numerous others on a national and global scale were cancelling or postponing their events, the WSOP Circuit events moved forward.

Initial cancellations found the WSOP Circuit’s international tour moving forward at King’s Casino in the Czech Republic, even as European governments were beginning bans on public gatherings. And on the United States side, stops at Harrah’s Atlantic City and Bicycle Casino in Los Angeles, played out as well.

Enter Friday the 13th of March. Late in the day, the World Series of Poker announced drastic changes to the tour and a new online series to begin…the very next day.

With less than a day’s notice, the WSOP.com Online Super Circuit Series was ready to go.

Before getting to the new online series, let’s take a look at the WSOP announcement regarding events on its international and US-based tours.

The Harrah’s Atlantic City stop kicked off on March 5 and was nearing its conclusion when organizers suspended it. “The event is expected to resume where it left off when an appropriate time window has been determined.”

In addition, the Bicycle Casino series in Los Angeles started on March 7 and was well into its series when stopped. It will also resume when appropriate.

Similarly, the international stop at King’s Resort was more than halfway through its series when it was suspended. This will also resume where it stopped when organizers and casino staff are able to do so.

Bally’s Las Vegas was on the calendar for March 19-30 but postponed indefinitely. “Should new dates be established, they will be announced.”

The US-based tour was set to arrive at Harrah’s Cherokee in North Carolina for an April 8-20 run, but the WSOP postponed that one indefinitely, too.

And back overseas, the stop scheduled for April 9-19 at Casino Barriere le Croisette in Cannes, France is also postponed indefinitely.

Not long after the WSOP announcement said that the Hard Rock Tulsa stop in Oklahoma started on schedule March 11, the casino and WSOP decided to end it. All events scheduled to start March 16 and beyond were cancelled. Any players who had won seats to the Main Event via satellites could redeem their entries for cash.

Another late cancellation was also the upcoming St. Maarten stop at the Sonesta Maho Beach’s Casino Royale set for March 26 to April 6. They postponed it indefinitely.

With less than 24 hours of notice, the WSOP set up a WSOP.com Online Super Circuit Series. Complete with 18 gold ring events, the new schedule will run from March 14 through March 31 with more than $1 million in prize pool guarantees.

Players located within the borders of Nevada, New Jersey, and Delaware will be able to play. They need not be residents of those states to compete, as eligibility is relegated to location only.

The WSOP Circuit is moving online.

The @WSOPcom Super Circuit will award 18 Circuit rings in 18 days and more than $1 million is guaranteed starting tomorrow!

The very first event kicked off the series yesterday, March 14, as a $320 buy-in No Limit Hold’em Double Stack event with a $50K guarantee. It offered two reentries per player. And it did quite well.

The next event will get underway shortly today, and there will be one event per day going forward. The schedule is as follows:

It should be noted that gold rings will be awarded to each first-place finisher. And the Main Event winner will receive a free entry to the 2020 Global Casino Championship. All of the events garner points for the season’s leaderboard, and there will be a Casino Champion from this series – the player with the most points – who also earns a seat into the Championship.