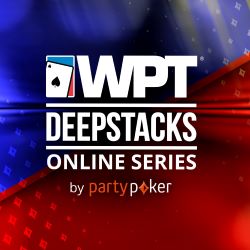 There couldn’t be a better time for the World Poker Tour to be affiliated with PartyPoker. With live poker practically at a standstill around the world due to coronavirus shutdowns, the WPT has an online option.

As it turns out, the WPT was already in talks with PartyPoker to coordinate offering some events online. And now, just two weeks after the company announced its first WPT Online Series by PartyPoker, there is more. This time it’s the WPTDeepStacks Online Series.

WPTDS For French and Spanish Players

When the WPT had to cancel a number of tournaments due to coronavirus concerns, several of them happened to be WPTDeepStacks events. Further, one of them was the WPTDS European Championship scheduled for April in Deauville, France.

So, WPTDeepStacks announced its partnership with PartyPoker to offer the first WPTDS Online Series. It will be hosted on the PartyPoker platform available in France and Spain.

For Spanish players, they will have 44 tournaments in their series with €2.5 million in guarantees, also running April 5-20. They will not have the high roller options. Their buy-ins throughout the series will range from €2 to €250, but their Main Events are the same as in France.

The full schedules can be found on the PartyPoker LIVE website.

WPTDeepStacks Announces Online Events on @partypoker in France and Spain this April!

Of course, the coronavirus pandemic could not have been predicted, especially in the scope by which it has affected so many countries around the world. But the WPT had plans to offer its product online anyway. Those talks began with PartyPoker a couple of years ago.

WPT CEO Adam Pliska explained to PokerNews that the partnership was “terrific” in that PartyPoker sponsors many of the WPT events around the globe already. The two simply wanted to develop a solid online poker tournament schedule, one that respected the WPT name.

They originally hoped to announce the online series to run in May…but when COVID-19 forced the WPT to cancel events around the world, they moved it up. “The timing worked out well,” said Pliska. “You quickly react to the market.”

Speaking of the WPT Online Series by PartyPoker, the World Poker Tour announced it on March 13, the same day that it officially cancelled many of its live events on the main tour and WPTDeepStacks.

The inaugural WPT Online Series will feature a WPT500 tournament, WPTDS event, and a Main Event, though there are a total of 10 events with the WPT name. Those 10 events offer a total of $15 million in prize pool guarantees.

PartyPoker will also run other events throughout that time of May 10-26, so players will have the opportunity to compete for shares of $30 million in total guarantees.

A quick look at the WPT portion of the schedule is as follows:

Planning to play the WPT Online Series on @partypoker ?

No better way to qualify than playing the WPT Passport satellites running daily!

And this Friday at 21:00 GMT @alexogray will be playing the $55 Semi Final with a bounty of a Semi Final seat!https://t.co/4cThZOOK4q pic.twitter.com/9yROKrUZXO