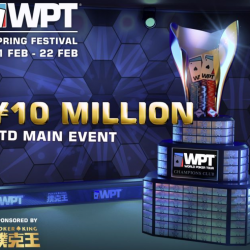 Earlier this week, the World Poker Tour announced that Allied Esports Entertainment sold it for $78.25 million. Compound that with the ongoing and unpredictable nature of the coronavirus pandemic into 2021 after nine months of it in 2020. It all adds up to a WPT year is going to be full of surprises.

This week, the World Poker Tour touted the growth of its 2020-launched WPT Online by revealing a new online poker festival. This time, however, it is not with its longtime partner PartyPoker, which has hosted its 2020 online series and is currently running its WPT Montreal. The WPT Spring Festival will be sponsored by and hosted on Poker King.

Many in North America are unfamiliar with Poker King, as it operates in Asia. Some may recognize its two primary ambassadors, though: Phil Ivey and Tom Dwan.

The entire series is set to run February 11-22 on Poker King. And all denominations for the buy-ins and prize pools are listed in Chinese yuan. It will offer more than ¥12 million in total guarantees, which equates to approximately $1.85 million.

The full schedule is as follows, and players can click here for a downloadable schedule with satellite and start time details.

The highlighted event above is the Main Event, which offers Day 1A on February 17, Day 1B on February 18, and Day 1C on February 19. Its final table will play on February 22 and will be livestreamed with a 60-minute delay. Fans can watch in four languages: English, Chinese, Hindi, and Vietnamese.

Information regarding reentries is not available.

(The currency conversions above for buy-ins put one RMB equal to 0.15 USD. These are approximations and may change based on value over time.)

World Poker Tour CEO Adam Pliska noted that this series on Poker King is a part of the WPT’s expanding global footprint. “We are extremely happy that our players in the Asian region will be able to experience the thrill of a WPT event conveniently from their mobile devices.”

WPT VP of Global Tour Management Angelica Hael touted the variety of buy-ins to appeal to players with different bankrolls. And she commented on the new partnership with Poker King: “The WPT looks forward to working alongside the Poker King team to operate this first-of-its-kind festival and live stream the Main Event final table in multiple regions and languages.”

Poker King ambassadors Ivey and Dwan are scheduled to play in the events, as is NBA Hall of Famer Allen Iverson and WPT champion Nick Petrangelo.

Poker software developers built the Poker King platform in 2018 for Asian players who wanted a poker site aimed at them, one that they could trust as fair and safe. They hired “professors from famous Ivy League schools” and partnered with the “world’s most advanced Amazon and Microsoft cloud technology companies” to create Poker King.

Longtime pro poker player Tom Dwan became the site’s first official spokesperson in 2019, and Phil Ivey joined as an ambassador in 2020. The site sponsored the Triton Poker Super High Roller Series in early 2020 (before the pandemic).

Poker King boasts of 1.2 million registered users, and it claims to run 50,000 to 80,000 table games each day. It is registered with CEZA, a gaming authority in the Cagayan Economic Zone and with First Cagayan in the Philippines.