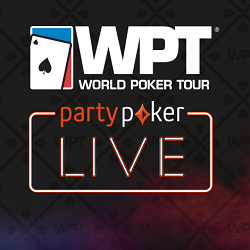 Since the World Poker Tour announced its partnership with PartyPoker LIVE for 2019, events have appeared on the WPT schedule that are unique and appealing. And it has allowed the WPT to bring other events, such as WPT500 and WPTDeepStacks, along for the ride.

The first stop of the WPT-PartyPoker LIVE relationship happened in late 2018 in Montreal, but the first stop of 2019 was in Sochi, Russia. The city has been going out of its way to host large poker events, and the WPT took its players there in January for several tournaments, which culminated in the WPT Russia Main Event.

The next coordinated stop was in March in Barcelona, Spain, where the WPT brought all three tours to the players for action that ended up making WPT history.

And when all was said and done, there were two new members of the WPT Champions Club.

The festival surrounding WPT Russia officially started online at PartyPoker with two starting days, and three live flights followed to gather the entire field. The buy-in was ₽198,000, and there was a prize pool guarantee of ₽90 million. That set up these final numbers:

Day 2 started with 271 players but ended with only 96, and Day 3 took the majority of them into the money. When the clock stopped that evening, only 17 remained with Oleg Pavlyuchuk in the chip lead. As Day 4 played down toward the final table and did so in just three levels, with Denis Sapozhnikov ousted in seventh place to set the official final table.

The last day of Main Event action began with Denys Shafikov as the chip leader and Aleksey Gortikov not far behind, followed by Yauhen Kontush, Mikhail Galitskiy, and Oleg Pavlyuchuk, with Nikolay Fal on the short stack.

It took two dozen hands for Pavlyuchuk to lost it all at the hands of Gortikov and exit in sixth place. Nearly three dozen more hands into action, chip leader Shafikov eliminated Galitskiy in fifth place, and he did the same to Fal in fourth place a short time later. Gortikov stepped back in to oust Kontush in third place, but Gortikov trailed Shafikov going into heads-up play. Gortikov did double up rather quickly and put up a stellar fight, but Shafikov stayed aggressive. Eventually, Gortikov made his move with A-7 suited against the pocket nines of Shafikov, but a nine on the turn solidified victory for Shafikov.

Denys Shafikov takes down the #WPTRussia by @partypokerlive Main Event defeating a field of 503 players to take home $255,258

The action at Casino Barcelona was preceded by two days of online play before action got to the live tables. Meanwhile, the entire festival was setting records with the WPT500, WPTDeepStacks, and WPT Main Tour combining to attract 5,098 players and paying more than €6.72 million in prize money. As for the €3,300 buy-in WPT Barcelona Main Event with a €3 million guarantee, however, the final numbers were impressive by themselves:

After the online and live starting days, Day 2 worked the field down to just 182 players, and Day 3 broke through the money bubble. As that night came to a close, WPT Russia champion Denys Shafikov busted in 32nd place, and only 24 players survived. Boris Kolev sat atop that leaderboard, and Day 4 put him to the test as most players exited the tournament. Ultimately, Martins Adeniya was the seventh place finisher for €94,000 to end play.

The final table was set for March 17 with Vitalijs Zavorotnijs holding the most chips but Eric Sfez close behind. Niko Koop, Boris Kolev, and Jerry Odeen rounded out the middle of the pack, and Alain Zeidan sat on the shortest stack.

Sfez quickly took the lead, and Zeidan took only eight hands to push all-in, though he was eliminated by Kolev. The latter took that momentum into the chip lead, while Odeen suffered and was ousted by Kolev in fifth place. Zavorotnijs doubled through Koop and then eliminated him in fourth place soon after. Double-ups abounded in the hands that followed, and Zavorotnijs soared well over the 20 million mark. Zavorotnijs then busted Sfez in third place, taking 28,525,000 chips into heads-up against the 8,275,000 of Kolev. It only took three hands for Kolev to push with A-Q on a Q-J-4-7 board with two spades. Zavorotnijs called with K-9 of spades and hit the deuce of spades on the river to win.

"When you work hard for something, and it happens, to be in this spot right now, it feels like a dream come true.” – Vitalijs Zavorotnijs become the first Latvian WPT Champion by winning #WPTBarcelona. Read the full recap from @CasinoBarcelona: https://t.co/khwM0FrdkY pic.twitter.com/tBll4mBVRK