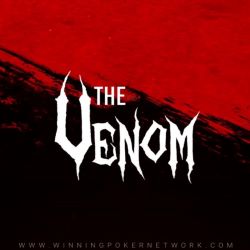 Americas Cardroom promoted it for months. All sites on the Winning Poker Network hosted the tournament, one that has become synonymous with breaking records and accumulating massive prize pools. And the Venom struck again.

This Venom tournament didn’t set a new record, but that’s not to downplay its success. It was very much a success.

The event boasted of an $8M guarantee on the prize pool. The number of players and entries flew past that number, though, and surpassed $9.4M. And when it was all said and done, a Brazilian player collected more than $1.1M for the win.

It all started in 2019. The decision-makers at the Winning Poker Network (WPN) wanted to create a massive tournament, the largest in recent years for US-facing poker sites. They called it the Venom.

From the first one in the summer of 2019 to the one that just concluded during the first week of February, the Venom has continuously surpassed expectations.

There was also one different Venom in 2020, one with the popular progressive knockout format:

Let’s see how the latest Venom went down.

This most recent Venom started on January 22 and cost $2,650 to enter, though many players found their entries at a discount through satellites and qualifiers. The tournament offered four starting flights through January 31. All of the survivors gathered again on February 1. As for the starting flights, they led to stellar final numbers:

All players who made it through their starting flights with chips returned on February 1 to play further. There were 596 players at the start, and five of them quickly busted to put the rest of the field into the money for at least $3,774.

Only 65 players returned for Day 3 on Tuesday, February 2. They played down to eight players, all of whom set to return on February 3 to play for the win.

We have a final table! And this is how we got here!

The players entered the final table with these chip counts:

GORDONITO was down to four big blinds before pushing all-in and doubling up. GORDONITO climbed up to more than 20 bigs and then decided to push it with K-9 suited preflop. PORKNOMAR called with pocket queens. The flop delivered two more to the flush, but the river failed, and GORDONITO busted in sixth place.

Five-handed play went on for awhile until ninjaman100 got it in with more than 30 BBs with A-Q against the pocket kings of PORNOMAR. But a king solidified the win on the turn and ousted ninjaman100 in fifth place. Ha19000 lost a big pot to PORNOMAR, relegating the former to eight big blinds, which shrunk to six before moving all-in with A-J. SmashedAvocado called with A-10 and found a 10 on the river to bust Ha19000 in fourth.

GeNet1x was down to fewer than nine BBs when pushing with K-J suited, but PORNOMAR had pocket aces. Those aces held, and geNet1x busted in third place.

PORKNOMAR took the lead into the all-Brazilian heads-up portion of the game and only increased it round over round. SmashedAvocado hung in for more than an hour of play but finally moved all-in with 28.42 big blinds holding A-J. But PORNOMAR called with pocket jacks. The board delivered 6-6-3-3-5, and PORNOMAR won the Venom.

The final payouts were: