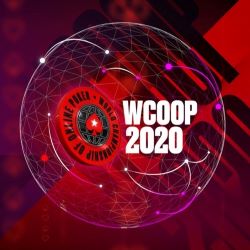 About 10 days ago, PokerStars kicked off its 2020 World Championship of Online Poker, better known as WCOOP. Action started on Sunday, August 30 with four events, and approximately one-third of the schedule is already complete.

The series – PokerStars’ signature online poker series and the one that laid the groundwork for all other sites to follow since WCOOP began 19 years ago – offers a total of 75 events, but most have three levels of buy-ins attached.

Did we mention that PokerStars is guaranteeing more than $81 million across all of its prize pools?

It’s kind of a big deal.

The very first day of WCOOP on August 30 delivered a win to a well-known PokerStars name. Ambassador Ben “Spraggy” Spragg finished ninth at the final table of Event 5-H for $5,222.98 and then final tabled Event 5-L. And he kept going, eventually livestreaming his victory. He won $4,349.41 for outlasting 12,191 competitors.

All in all, Spraggy captured a WCOOP title and more than $9,500 for the day.

Day 2 brought a number of players back for the final day of Event 2-H, the $10K NLHE 8-Max PKO Sunday Slam. Dimitar “KuuL” Danchev not only took his chip lead from the previous day to the winner’s circle, he collected $400,494.59 for the victory. In addition, he collected nearly $250K in bounties.

Poker pro Ankush “pistons87” Mandavia grabbed a third career WCOOP title on Day 3 when he won Event 12-H, a $530 NLHE Heads-Up Turbo PKO Zoom event. Out of 526 players, Mandavia was the last one standing for the $40,792.90 first-place prize.

By the fourth day of the series, players found their groove. Ludovic “ludovi333” Geilich won his second career WCOOP in the $10K NLHE High Roller, which was Event 10-H, a two-day event on the schedule. His online poker account grew by $238,966.30 for that win.

Day 6 was a day of rest for most players, courtesy of PokerStars’ scheduling gurus.

In an extensive series like WCOOP, there can be players who capture more than one title in that single series. Two players already did it.

This past weekend saw Adrian “Amadi_017” Mateos win Event 28-H – an 8-Max Turbo OKO Freezeout, also known as the Sunday Cooldown Special Edition – for $80,211.93 and his third career WCOOP title. But he wasn’t done. The very next day, Mateos took on the $25K buy-in Super High Roller Sunday Slam. He ended up heads-up with Fedor “CrownUpGuy” Holz, and Mateos won it for $543,685.63 and his fourth career title.

According to the PokerStars blog, the numbers are rather astounding thus far.

The WCOOP leaderboards are already becoming quite competitive. Keep in mind that the winner of the overall leaderboard wins a trophy and $25K in cash. Each category also awards a trophy, but the low winner also gets $5K, medium gets $8,500, and high gets $12,500.

At this point, the overall leaderboard shows the top three as:

Aleksandrs10 also leads the low leaderboard, Kaggis of Norway and Muka82 of Brazil tie for the medium, and Naza114 leads the high, though theNERDguy isn’t far behind in the high category.