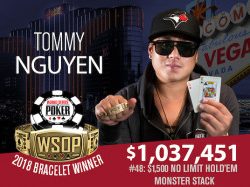 Tommy Nguyen became the ninth person to win over $1 million in 2018 early Thursday morning when he won the $1,500 Monster Stack for $1.03 million. Later in the day, two other events crowned champions.

Ryan Leng took down his first WSOP bracelet in the $1,500 Bounty NL Event while Joseph Coudon topped a stacked final table in the $1,500 PLO 8 Event.

The $1,500 Monster Stack concluded on Wednesday with after a marathon day that saw 29 players return to play for the bracelet and $1.03 million. Steve Billirakis was the only prior bracelet winner to make the final day of play and he eventually fell in 11th place.

This final table didn’t include any major headliners, so the final nine were all looking to make a name for themselves. Eventually, it was Canadian Tommy Nguyen and American James Carroll locking up heads-up for the bracelet.

Nguyen led by about 12 big blinds at the start of heads-up action and soon jumped out to a massive lead. Carroll tried to hold on, but Nguyen just proved too tough an opponent.

In the end, Carroll moved all-in with Kd-2c and found himself dominated against the Ad-Kc of Nguyen. The board failed to produce a deuce and Nguyen won the title.

Tommy Nguyen becomes the ninth millionaire made at this year's WSOP.

Tommy Nguyen was one course shy of graduating college but decided to give it up to become a professional poker player. The move paid off as Nguyen became the ninth person this summer to win $1 million or more at the 2018 World Series of Poker. He won his first career bracelet and $1,037,451.

Just four players returned to play for the bracelet on Thursday, including former November Niner and 2013 WSOP Main Event runner-up Jay Farber. Leng came into the final day as the chip leader with Christian Nolte and Ranno Sootla right behind him.

Farber managed to ladder up one spot with Nolte falling in fourth place. It was then Farber’s turn to hit the rail when his As-9c ran into the Ah-10h of Leng. Leng wound up making a flush by the river to take the event to heads-up.

Leng led Ranno Sootla by almost 2 to 1 at the start of heads-up play but Sootla soon managed to double into the chip lead. The pair went back and forth for a while before Leng finally pulled back into a 10 big blind lead.

A massive cooler ended this event abruptly. On a flop of 9d-8c-6c began a raising war that resulted in Sootla moving all-in with a set of nines and Leng making the insta-call holding 10c-7h for a flopped straight. The board failed to pair and Sootla was eliminated in second place.

Ryan Leng is pro poker player and coach for Chip Leader Coaching. Now he can call himself a WSOP bracelet winner.

After an unscheduled fourth day, @RyanLeng9 wins the $1,500 bounty event for over $272,000 and his first WSOP bracelet!https://t.co/boE9WwkF9D pic.twitter.com/KAg53FIP0Y

You don’t see as many $1,500 events with a stacked final table like we did on Thursday in the $1,500 PLO Hi-Lo final. Daniel Negreanu, Mike Matusow, Greg Jamison, Eli Elezra and Bruno Fitoussi all made the final table.

Out of the headliners, Eli Elezra and Bruno Fitoussi ran the deepest. Elezra had his second near-miss of the series, finishing in third. Fitoussi faced Joseph Couden heads-up for the title.

Unfortunately, Fitoussi was down almost 3 to 1 at the start of heads-up play and never gained any significant ground. Finally, he was all-in with Kd-Kh-Qd-2c against the Ad-3d-Qh-5h of Couden. Couden flopped a pair of aces with a low and finished the hand with two pair to win his first career bracelet.

Joseph Couden has an impressive list of live cashes going back a decade but never took down his first major live poker event until tonight. In addition to his first WSOP bracelet, he earned $244,370 to push him up to nearly $2 million in career earnings.

Congratulations to Joey Couden, winner of the $1,500 PLO/8 event for his first WSOP bracelet and $244,370.https://t.co/8xxXEDQSsB pic.twitter.com/MWuBH1DAr0