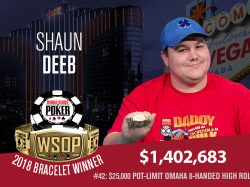 The final table for the $25k PL Omaha High Roller concluded on Saturday with James Calderaro looking to go back-to-back in the event. Prior Main Event Champion Scotty Ngyen was looking to win his fifth career bracelet in this event.

Also looking to add to their career bracelet totals were Shaun Deeb and Ben Yu. Jason Koon looked to add to a stellar 2018 with his first career bracelet while Ryan Tosoc was trying to make something happen with his super short stack.

Scotty Nguyen came into the final table with the chip lead. Reigning champion James Calderaro and Shaun Deeb were right behind. Here are the final table starting chip stacks.

Ryan Tosoc started the final table with just ten big blinds and he quickly put those at risk on a flop holding a pair of queens and a flush draw against a pair of aces for Yu. The board and river blanked both players and Tosoc hit the rail in sixth to collect $215,718

Jason Koon was next to hit the rail. He was all-in a flop of 9s-7d-2c with a pair of queens only against top two pair for Shaun Deeb. Koon picked up a draw on the turn but bricked the river. He finished in 5th, good for $295,606.

At this point, Shaun Deeb began to run away with this one, nearly building a 2 to 1 lead over the rest of the field. He extended that lead further when he knocked out defending champion James Calderaro in fourth. All of his money went in on a flop of Ac-9s-2c holding Ah-Ks-9d-8h.

Two big hands: Scotty Nguyen was at risk for his tournament life but doubled through Shaun Deeb.

Soon after, defending champ James Calderaro was knocked out in 4th ($414,134) by Deeb with a river save to fade the chop https://t.co/fN5hH8qeXW pic.twitter.com/JRO6EqByit

Deeb held As-9h-6s-3s for the same hand. However, the turn 4h gave Deeb a draw to a wheel and the river 5s completed his wheel and send Calderaro out in fourth. Calderaro followed up his bracelet victory in 2017 with a fourth place finish this year, good for $414,134.

Scotty Nguyen played well at this final table but took a crushing blow to his stack when he ran a pair of nines and flush draw into a pair of queens against Ben Yu. Yu doubled to leave Nguyen with just 10 big blinds.

Scotty Baby found a good hand to put those chips at risk with in Kd-Kc-10c-9h and Yu called with Ac-Qs-Qd-3s. Yu caught an ace on the flop while Nguyen picked up a gutshot draw. The turn and river blanked both players and Scotty Nguyen finished in third, earning $592,875. This was his largest live tournament score since winning the $50k HORSE back at the 2008 WSOP.

After knocking out Scotty Nguyen, Ben Yu took over the chip lead and led Shaun Deeb by 3.2 million at the start of heads-up play. He quickly jumped out to an 8 million chip lead, but the tide turned against him and Deeb started winning everything he touched. Soon, he found himself with a 2.5 to 1 chip lead.

Finally, Yu was all-in with a pair of sixes as well as a straight and flush draw against aces for Deeb. Yu failed to hit his draws and finished runner-up in the event. Ben Yu earned $866,924 for his second place finish.

This was the largest WSOP PLO High Roller to date and Shaun Deeb took it down to earn his third career WSOP bracelet and $1.4 million in prize money.