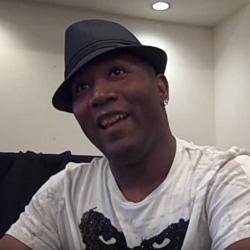 The last year – technically more like a year and a half — was a period of tumult for poker pro Raymond Davis. In fact, he spent much of it behind bars in a jail cell on numerous charges, with more added as courtroom appearances went badly.

When we last checked in with this case, Davis was in a Clark County jail in Las Vegas. He had been unable to post bail, which was $500K at the time. There were nine charges pending pertaining to sex crimes against minors, and Davis was trying to represent himself in court.

It was a mess.

Within the past few weeks, Davis finally pleaded guilty to lesser charges, such as contributing to the delinquency of a minor. The court allowed his release. The ordeal seems to be over…if Davis doesn’t do anything to jeopardize his freedom.

It's a story the I-Team first broke last year — a high profile poker player has now pleaded guilty after he was accused of sex crimes. The I-Team spoke with Raymond Davis today after the plea deal was reached.

How Davis Got to Jail

Davis has long been on the poker tournament scene, with event cashes dating back to 2002. He was a fixture at Las Vegas and Southern California tournament series, and he sometimes traveled to play as well. For many years, Davis has lived in Vegas.

In April 2019, the Las Vegas Police Department pulled Davis over for a traffic violation and arrested him on an outstanding warrant. In fact, that warrant dated back to September 2016, though he claimed he never evaded the warrant or even knew anything about it. The prosecution, however, asserted Davis lived under numerous aliases, purposely hiding from the authorities.

Regardless, David paid the required bond. The court relegated him to his home with an ankle monitor.

The charges were serious. There were nine counts of sex crimes against children, three felony charges and six gross misdemeanors. They related to incidents at Davis’ home prior to 2014 wherein he allegedly paid girls – aged 14 and 16 at the time – for various sex acts.

Davis returned to court to defend himself, but during the court proceedings, things went from bad to worse. His statements and actions in court included allegations of improprieties against Judge Jacqueline Bluth and the prosecuting attorney, Stacey Kollins. And Davis’ behavior was so egregious that he was taken back into custody. His new bail was set at $500K.

Months and Months Behind Bars

Davis spent the holidays behind bars. He eventually hired an attorney, Craig Mueller, but grew frustrated with that person. Davis submitted motions in December and January to dismiss his counsel, but the judge denied those motions.

By February, the attorney went to court on Davis’ behalf with a motion to dismiss the entire case. That attempt failed.

Davis then began filing motions for release from jail on his own recognizance due to the coronavirus pandemic. The court denied the request.

All the while, Davis continued to try to dismiss his counsel, even going so far as to file a bar complaint against him. The court considered that motion in July, at which point, the defense attorney conceded to withdraw from the case. The court then appointed a public defender, Adam Gill, though Davis expressed his opposition to that, insisting that he could represent himself. However, after the debacle in 2019, the court denied his request to defend himself because he showed that he refused to follow the court’s rules.

On October 6, the State of Nevada versus Raymond Davis went to a courtroom. (Kudos to Poker Fraud Alert for finding the video.) Early in the day, the parties selected a jury. Much of the proceedings throughout the day were muted from the livestream, though a few things became very apparent from the available proceedings.

–Davis and his public defender did not get along or seem to agree on anything. Their relationship was very contentious. They could not even agree on meeting or discussing anything prior to October 6.

–Davis was displeased that there was only one African-American juror.

–Judge Bluth was having none of Davis’ outbursts in court that day.

–Prosecution offered numerous plea deal offers, all denied by Davis against the advice of his counsel.

–Davis’ questions and expressions of misunderstanding were disingenuous, per Kollins’ via records of jailhouse phone calls.

About seven hours into the video below, Judge Bluth brought the jurors into the courtroom and started the indictment process. At that point, the charges became clearer and included sexual assault of a minor under the age of 14, lewdness with a child under the age of 14, and open or gross lewdness committed in Clark County on or between January 1, 2014 and July 23, 2015.

Look what #RealGrinders leader Raymond Davis stands accused of. Very serious #crime which will lead to him getting 25+ years in jail if guilty. #poker pic.twitter.com/IQrYO0i1Ju

The prosecution noted that the first girl in question was 13 years old at the time of the alleged incident in July 2014. She attended middle school. Her family was not well off, and she did not have a strong relationship with her mother. He met her on Facebook, complimented her, and promised to buy her gifts. They met in person, went to his apartment, and encouraged sexual behavior.

She continued to visit him because she needed the money. Davis offered extra money if she brought friends with her. The alleged assaults continued until some time in 2015, when the victim entered a juvenile detention center. She chatted there with an unofficial counselor and told that woman of Davis, and that woman reported the accusations to the police.

Pertinent to the case, the prosecution also introduces information about a woman to whom Davis offered money and a hotel room. She was a runaway, homeless and panhandling at the time with a 13-year-old girl she had befriended. She said that he demanded sexual services in exchange for the financial assistance. Another two women – 14 and 15 at the time of their interaction with Davis – said that he promised a hotel room for sexual favors. These women all came forward as the police investigation progressed.

After the prosecuting attorney worked through most of his opening statement, the judge paused the proceedings and removed the jury from the courtroom.

After a pause in the livestream, Davis officially signed and accepted the plea agreement.

Davis did agree, in addition, that if he breaks the tenets of the agreement, he could face 1-6 years in prison and a fine of up to $5,000 for the felony and up to six months in jail and up to $1,000 for the misdemeanor.

Officially, Davis must return to court for sentencing, which appears to simply be a formality to acknowledge time served and establish probation parameters. That will take place on February 1, 2021.

A Tangled Web He Weaves

According to 8NewsNow Las Vegas, Davis claims to have pending litigation against two attorneys, a judge, and a sheriff. He wrote as much in a Facebook post on his RealGrinders page, adding some other nuggets:

“I do not want to go into detail of the case due to having a 4 million dollar, a 5 million dollar, and a 390,000 lawsuites pending in U.S. District Courts, I only wish you all could have seen the jury pool and then form an opinion, I would have plead to anything, I was simple drawing dead. … After litigation is over I will be writing a tell all book…”

He went on to say that he lost everything by being in jail for so long, including his home and pets. Davis said that it happened “without due process of the law” and that the courts essentially forced a confession.”

“I was not getting out until I confessed to something, the state would have simple just kept fileing charges until they got the results they desired.”

In another post, Davis added more, including that one of the victim’s age was fabricated to “give people harder sentences, the state knew this was a lie, but couldn’t let me go do to the litigation it would cost.”

Davis noted that he plans to become an advocate for victims and the “falsely accused.” He said that his movement will include “some of the biggest names in poker, sports and entertainment.”

He wrote all of those posts within days of his release. In the weeks since, he does not appear to have returned to jail.