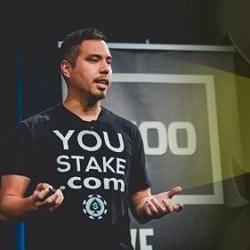 CEO Frank DeGeorge is ready for business as usual

The YouStake matter is finally settled. While it didn’t affect a large part of the poker community, it was an inconvenience for some players who used YouStake to fund their poker play.

As of December 2017, the United States Securities and Exchange Commission (SEC) dropped its investigation of YouStake, the crowdfunding website established to help poker players find backers for their poker endeavors and share in the profits. And in response, YouStake allowed the dismissal of its case against the SEC.

For all intents and purposes, YouStake is back and no longer under investigation.

For those unfamiliar with poker backing, poker players sometimes cannot afford or do not want to put all of their money on the line to play tournaments. Backing allows them to raise money via friends and supporters who believe in their poker skills. Players often provide statistics and results showing their track record at the tables, and backers can then pledge a percentage of a tournament or series buy-in for that player. If the player cashes or wins, the backers split a portion of the profits. It is a way for poker fans to support players and also invest energy into players to make the tournaments more fun to follow.

YouStake provided an online platform that facilitated the backing process. Players who handle their own backing can get bogged down with tracking backers, percentages, payments and reimbursements, and communication with backers. YouStake takes a fee for simplifying that process and allowing it to run through an automated system. YouStake also makes it easier for backers to follow the results of their investments through a trusted source reporting updates.

How the Kerfuffle Began

YouStake had been in business for nearly one year when The SEC issued subpoenas to YouStake and its CEO, Frank DeGeorge, to obtain documents for an investigation. The company complied with that April 2016 request and provided testimony in March 2017 upon the SEC’s second request for information. YouStake even temporarily closed its business to staking “to demonstrate good faith cooperation” with the investigation.

By the summer of 2017, however, when YouStake was unable to obtain any updates on the case, the company took action and filed a lawsuit against the SEC in the US District Court for the Western District of Virginia. The request for a declaratory judgment was filed because “it has become increasingly evident that the SEC is unable to identify any specific statute or regulation contravened by YouStake’s operations.” The court documents went on to state, “Meanwhile, the restriction of the business has cost the company ‘hundreds of thousands of dollars.’”

The burgeoning business wanted an answer or a stop to the federal inquiry, full stop.

Last week, Flushdraw reported that the SEC dropped its investigation and YouStake’s case was subsequently dismissed. Considering the SEC never filed an official case or charges against the company, never clarified its concerns, or took any further action beyond obtaining documents and testimony, the move was the end of an expensive legal mess for YouStake.

YouStake’s legal counsel was notified on December 18, 2017, of the conclusion of the investigation. According to the documents obtained by Flushdraw, “Based on the information Enforcement Staff has of this date, it does not intend to recommend an enforcement action by the SEC against YouStake.” Further, the documents stated the SEC admitted “it is not now contending that the business model of YouStake involves the sale and/or exchange of securities.”

While the SEC paperwork only acknowledges that the SEC has “not yet made a determination” on YouStake’s business model as of yet, YouStake’s attorneys believe the case is closed.

With that, YouStake reopened its virtual doors to accept poker players and gamers, set up their backing propositions, and accept backers.

It remains to be seen if the long downtime caused by the SEC investigation caused irreparable damage to the company. But the need for the service in the poker community remains, so YouStake is back to get poker players back to the tables and fans back to the investment business.