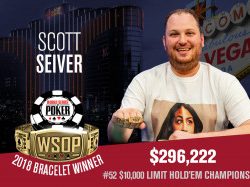 Limit Hold’em poker tournaments are a dying breed outside of mixed games like HORSE but the World Series of Poker is the one place you can still find them. On Wednesday, the final table of the $10k Limit Hold’em Championship played to a conclusion with a strong field of nine players looking to take down the title.

In the end, it was Scott Seiver that won his second career bracelet, also taking home the $296,222 top prize.

Day 3 of the Limit Hold’em Championship was a long one with 14 players returning to try and take home the title. Dan Zach came into the final day as chip lead but faced a tough field that included Anthony Zinno, Maria Ho, Brock Parker, Benny Glaser, Nick Schulman, and Scott Seiver.

Maria Ho was looking for her first carer bracelet in this event just a day after officially being inducted into the Women in Poker Hall of Fame. Unfortunately, she fell short of the final table, finishing in 12th. Her last hand saw Matt Szymaszek river two pair against what was apparently a single pair. Ho earned $20,253 for her deep run.

Benny Glaser ended up the final table bubble boy in this event. He was all-in with pocket nines against pocket Tens for Szymaszek and couldn’t catch a nine.

Glaser’s elimination setup a final table that included Phillip Cordano, Matt Glantz, Scott Seiver, Michael Moore and Anthony Zinno. Seiver started the final as the chip leader and was looking for his second bracelet. Moore and Zinno were also looking to improve their bracelet counts.

With only a couple of stack really in the “short stack” range, this final table took quite a while to complete with swing galore. Michael Moore failed to improve his bracelet total, finishing in eighth place. He ran pocket fives into pocket sixes and failed to improve.

Philip Cordano was looking for his first bracelet at this final but also fell short. He put the last of his chips in on a queen-high flop holding A-10. Matt Glantz has Q-J and that held to send Cordano out in sixth place.

Matt Glantz soon followed in fifth place when his A-Q failed to hold against the J-10 of Scott Seiver. Seiver was one of the short stacks with four players left but he managed to pull out the cellar and take the chip lead in just a few short hands.

He lost that lead for a while to Matt Szymaszek who went on his own run. After knocking out Christopher Chung in fourth place, he had a sizable lead over Seiver and Anthony Zinno.

Zinno was chip leader at one point at the final table but only mustered a third-place finish. In the final hand, his Q-10 was outdrawn by Seiver when his Q-3 binked a three on the flop.

This left Szymaszek and Seiver to battle for the title. Szymaszek only led by six big bets at the start of heads-up play but it didn’t take long for Seiver to even things up. Seiver then got hot and multiple times held about an 8 to 1 chip lead.

Eventually, Szymaszek was left with just around a big bet and put those chips at risk with an open-ended straight draw against a gutshot for Seiver. Seiver ended up catching a pair and that pair was enough to give him the hand and the bracelet.

Scott Seiver has been one of the most successful live tournament players in history with over $23 million in live earnings, good for 10th on the All-Time Money List. Amazingly, it has been a decade since he last won a bracelet.

Seiver’s last bracelet came in 2008 when he won a $5,000 NL bracelet. A lifetime later in terms of poker, he finally earns his second career WSOP bracelet, earning $296,222 in the process.