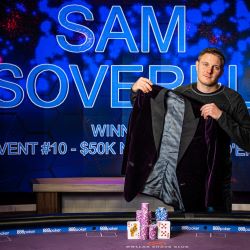 The latest edition of a Poker Central high-stakes poker tournament series is complete. Ten players walked away with Poker Masters tournament titles for winning individual events, all of which played out at the ARIA on the Las Vegas Strip.

One of those players, Sam Soverel, not only won the Poker Masters Main Event but also the overall series champion. Soverel earned the Purple Jacket for his work and yet another title to go with his British Poker Open honor of Player of the Series.

Earlier this week, we reported on the players who won the first five events in the Poker Masters series. Aa a reminder, they were:

Now, it’s time to take a look at the other five tournament winners in this series:

Registration closed with 51 entries, and the prize pool was set at $1,275,000, enough to pay the top 8 finishers. That time came when David Peters bubbled the tournament and Elio Fox became the first to cash for $51K. David Stamm then busted, and the night came to an end.

Chance Kornuth took a massive chip lead into the final table, while Kristen Bicknell was the second-shortest stack. But Bicknell doubled early on and did it again three-handed to lessen Kornuth’s lead. She ultimately pulled out the win.

HUGE thankyou for the kind messages all! My heart is BURSTING with gratitude for my friends, family, coaches and investors who have always been there, especially through the tough times, and believed in me so that I had this opportunity! 💞🙏💞https://t.co/3SF4NqghyI

This tournament delivered 34 entrants and a prize pool of $850K. Only the top five players were to be paid from that fund.

At the end of the first day of play, Ben Lamb busted on the money bubble in sixth place, and Sean Winter took the chip lead into the final table. Sam Soverel started strong, though, by ousting the first two players on Day 2. Winter took a significant lead into heads-up with Soverel, but the latter chipped up and won.

With only six players to be paid, Nick Petrangelo busted in seventh place to open the payouts and end Day 1. Orpen Kisacikoglu was the chip leader, but Sergi Reixach started Day 2 by eliminating two players in one hand. Reixach then busted Soverel, Kisacikoglu, and won heads-up play for the title.

When the field dwindled to the money bubble, it was Poker Central founder Cory Katz who busted on that bubble, and play continued as Kahle Burns busted Alex Foxen to end the night.

Day 2 began with Ali Imsirovic in the chip lead but Burns in a close second. The action played out with Burns eliminating several contenders and ultimately Imsirovic, as Burns captured the victory. This came on the heels of a stellar run at the WSOP Europe at which Burns won two gold bracelets.

Kahle earned it against a Final Table mostly comprised of players on the points leaderboard and kept himself in contention for the #PurpleJacket@ARIAPoker @PokerGO @PokerCentral pic.twitter.com/7xrMExF8I0

The Main Event of the series offered only one reentry during the first 10 levels. When that was complete, the tournament recorded 34 entries and a $1.7 million prize pool.

With only the top six players being paid, Day 1 played down to a single table, after which Kahle Burns and Bryn Kenney busted at the same time, courtesy of Chris Hunichen. Seth Davies then busted Alex Foxen in seventh place.

Day 2 began with Hunichen in the lead, but the table contained six players but only five paid spots. Ali Imsirovic ended up being the money bubble player out first. From there, Sam Soverel played a strong game and took a massive chip lead into heads-up against Hunichen. Soverel quickly turned that lead into a win.

Not only did Soverel win the Poker Masters Main Event, he topped the player-of-the-series leaderboard with seven total results over the course of the 10 events. This was how everyone lined up in the end:

Soverel won an additional $100K for earning the most points in the series, and he won the Purple Jacket.