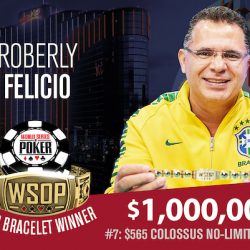 The $565 COLOSSUS drew a staggering 13,070 entries over the weekend and after nearly a week of play, we finally have a champion in the event. Meanwhile, Daniel Ospina defeated Timothy Mcdermott and Shaun Deeb to take down the $1,500 NL 2-7 Draw Event.

Meanwhile, Justin Bonomo’s amazing run in 2018 continues as he has made the final four in the $10k Heads-Up NL Hold’em Championship. He is the only bracelet winner left in the event and looks to win his second career bracelet on Friday.

After five days of play, the $565 COLOSSUS finally reached the final table early Thursday morning. The final nine players returned Thursday afternoon to play for the bracelet and $1 million in prize money.

The headliner of this final table was 2010 WSOP Main Event runner-up John Racener. He started as the third-shortest stack and looked to win his second career WSOP bracelet. Sang Liu was the chip leader heading into the final table and was guaranteed to make his largest live tournament score regardless of his finish.

John Racener had a tough road ahead of him as he started 7th in chips. He was unable to get anything going and eventually shoved his last 1.89 million with Ad-Jh. Song Cheo made the easy call with pocket sevens. The board failed to hit Racener and he finished in 8th place, earning $74,178.

Cheo took the chip lead a bit later but ran into an unfortunate cooler. Scott Margereson doubled through Cheo and became the new chip leader when his 5h-4s hit a runner-runner straight to crack the flopped set of jacks from Cheo. A while later, Cheo put his remaining stack at risk with Ad-7c and Timothy Miles called with pocket eights. The board failed to hit Choe and he hit the rail in sixth, earning $126,158.

After Timothy Miles fell in fifth place, it took almost another five hours to knock out a player. Scott Margereson had a roller coaster ride at the final table but was unable to take down the bracelet. He put his remaining stack at risk pre-flop with Ad-6h and Roberly Felicio called with pocket nines. An ace failed to hit the board and the former WPT champ fell in fourth, earning $220,040.

Blind were 600k/1.2M at this point and nobody had more than 20 big blinds in their stack. Roberly Felicio started to go on a bit of a run and soon had both Sang Liu and Joel Wurtzel down to about 10 big blinds.

Wurtzel was the first to try and get his stack into the middle, moving all-in with Ah-4s. Lui had him covered and called with Kc-10c. A flop of Kc-Qc-5c gave Lui the lead and the turn 9c gave him a flush to eliminate Wurtzel in third. Amazingly, this was Wurtzel’s first live cash, good for $300,000.

Only 5 million chips separated Felicio and Liu heads-up, or about 4 big blinds. What proceeded was a crazy hour of play that saw Liu take the chip lead only to see Felicio spike a three-outer to double and retake the lead.
Finally, Liu moved all-in with As-6h and Felicio looked down to Ad-Jh and made the call. The board missed both players and Roberly Felicio won the COLOSSUS. Sang Liu earned $500,000 for an amazing run in this event.

Roberly Felicio went from grinder to poker millionaire in a single event. Prior to this event, he has only $95k in career earnings. On Monday, he cashed in a Rio Daily Deepstack for just $377. Today, he won $1 million in the COLOSSUS along with his first WSOP bracelet.

Only three players remained in the $1,500 NL 2-7 Draw when play resumed on Thursday. Daniel Ospina had a 2.5 to 1 chip lead over Shaun Deeb and Timothy Mcdermott. Deeb was looking for his third career bracelet while the others were looking to break through for their first.

This final took just over an hour to play out and it only took 20 minutes to lose the first player. Deeb raised pre-draw and then called a three-bet of 105k from Ospina. Deeb drew one while Ospina stood pat.

Daniel Ospina had a monster leads at the start of heads-up play, holding 1.6 million in chips to just 250k for Timothy Mcdermott. Mcdermott managed a quick double-up but gave those extra chips back after just a few hands.

A few hands later, Ospina shoved from the button and Mcdermott made the call. Mcdermott showed 10-7-5-3 and drew one while Ospina showed 9-7-6-2 and also drew one. Mcdermott drew a queen and needed Ospina to draw bad. However, Ospina drew a four and that was the tournament.

Daniel Ospina took some time away from the game, reignited his passion for it and came back to win his first bracelet in the exact event he finished runner-up in three years ago.

Only Schwippert and Bonomo managed to make it to the Elite 8. Bonomo defeated Mark McGovern to advance to the Final Four but Schippert fell to Martjin Gerrits. Joining them in the final four are Jason McCannon and Juan Pardo Dominguez.

Bonomo is the only former bracelet winner to move to the Final Four and is looking to secure his second career WSOP bracelet on Friday.

Other events that are scheduled to conclude on Friday include the $1,500 Big Blind Antes NL Hold’em and the $1,500 HORSE.

Friday will be a big day as the $565 PL Omaha Event will hold two flights and the $5k NL Big Blind Antes kicks off. Also, the second flight of the $365 GIANT commences.

Saturday is going to be another insane day at the Rio as the Millionaire Maker kicks off with a $1 million guarantee.