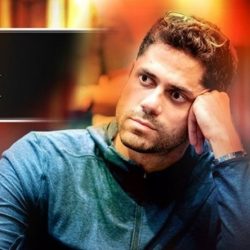 It has been a busy year for PartyPoker, though not in the way it planned. The operator had every intention of staying busy with its usual online poker offerings online but had a full slate of live tournaments scheduled around the world. The coronavirus pandemic put a painful halt to all of those plans.

In response, though, PartyPoker increased its online poker options exponentially. Hosting everything from series for the World Poker Tour to Poker Central and more, PartyPoker had plenty to do.

And in the middle of it all, PartyPoker found time to welcome a new member to its Team PartyPoker roster, though with a focus on its EU network. French poker pro Benjamin Pollak took that spot.

Since the PartyPoker EU network operates outside of the global PartyPoker shared network, it runs separate tournament series. At this time, the EU sites are running POWERFEST through September 23.

It was the perfect time to bring a new French poker pro to the team, and Benjamin Pollak was that pro. He is now playing under the screen name “BenjaminPollak.”

“I’m thrilled and very excited to join the PartyPoker team,” Pollak said. “They’ve supported players from the beginning and see the game as I do. I couldn’t be more happy to support them and be part of this great adventure. See you all around the tables!”

I’m thrilled and very excited to join the PartyPoker Team. They’ve been supported the players from the beginning and see the game as I do! An exciting sociable and fun game ! I can’t be more happy to support them and be part of this great adventure ♦️See you all around the tables pic.twitter.com/v0Lu8QV5nA

During his time as a student in an engineering program, Pollak began playing poker with friends. They were inspired by watching the World Series of Poker on television, and the group of guns in their early 20s played for fun.

About the time he launched his career as an engineer, Pollak decided that the pull toward poker was too great to ignore. He decided that he would allow about a year and a half to make it as a poker pro. If that didn’t work, he had a solid career upon which to fall back. He spent his days at the Aviation Club de France to cut his teeth at the tables.

Pollak’s live tournament results began showing up on the Hendon Mob database in late 2007 when he won his first event at the Euro Finals of Poker in Paris. He went on to win numerous events in Paris and London, including a European Poker Tour (EPT) London side event in 2010.

His first cash in America came in 2013 at the World Series of Poker (WSOP) in five events, the best of which was a seventh-place finish at the NLHE 6-Handed event. However, his biggest cash that summer was for 27th place in the WSOP Main Event for $285,408. He continued to do well in EPT and WSOP events.

The worldwide poker community became more acquainted with Pollak in 2017, when he made the WSOP Main Event final table. He eventually finished in third place for $3.5 million as Scott Blumstein went on to win it. Later that year, Pollak finished second in the WSOP Europe High Roller event for €460,622 in Rozvadov.

He currently plays quite a few high-stakes live events. He won a 2018 US Poker Open event in Las Vegas, 2018 EPT High Roller in Barcelona, and 2019 EPT Monte Carlo High Roller.

As mentioned, Pollak will now play online at PartyPoker and likely in live events when they resume in a post-coronavirus environment.

He joins a wide-ranging team of sponsored pros:

There is also a large group of ambassadors that comprise a separate team. With well-known comedian and actor Kevin Hart on one end and some very recognizable poker pros on the other, these players also represent PartyPoker online and live.

The Twitch Team is one comprised of some prolific online poker streamers who represent PartyPoker on its Twitch channel, as well as their own.

Finally, there are three longtime poker pros, ones who have served in a number of roles in the poker industry around the world: Mike Sexton, John Duthie, and Bruno Fitoussi.