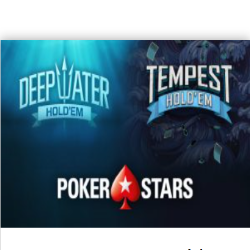 This really all started in 2017, though, with the introduction of Power Up, a game meant to attract esports competitors to poker. It became quite popular.

However, PokerStars recently announced that it would be getting rid of Power Up, but two new poker variants – Deep Water Hold’em and Tempest Hold’em – would be introduced to players. These, too, will be available on a limited-time basis, but they are now live on most PokerStars platforms.

Power Up Powering Down

Poker Industry PRO obtained the scoop directly from PokerStars last week that Power Up is going to be removed from the online poker client.

The game was introduced in early 2017 as a combination of poker with esports games online. Power Up was a three-handed game of No Limit Hold’em but with the use of power cards that could be used for such moves as seeing an opponent’s cards, eliminating a card from the board, or exchanging one’s own hole cards.

Players found the game to be a unique challenge that puts their poker skills into the mix with those from the world of esports. As the unnamed PokerStars representative told Poker Industry PRO, “Designed to bridge the gap between poker and video games, Power UP had a strong and loyal following.”

“PokerStars has made the decision to remove [Power Up] game from the poker client,” a PokerStars rep told us. “Designed to bridge the gap between poker and video games, Power Up had a strong and loyal following…”

While none of the new poker variations put into play in the past few years had been intended as permanent additions to PokerStars, many hoped Power Up would be different. Since PokerStars had spent years developing the game and then opened it up for real-money gaming for more than two years, players hoped Power Up would stay.

That is not the case.

New Games to Fill the Void

At the time of the Power Up reporting, Poker Industry PRO indicated that other games were set to take its place. Deep Water Hold’em was one game that had been teased earlier in 2019 but was finally ready to make its debut.

Another game that may be available soon is a new title called Swap Hold’em. Mimicking one of the Power Up powers of swapping a hole card for a new one from the deck, Swap Hold’em is being prepared for a release “soon.”

Poker Industry PRO also suggested that Omaha versions of Split (a version of running the board twice) and Showtime (exposing folded cards).

Played as a NLHE Six-Max game, there are three blinds instead of the traditional two. Deep Water Hold’em boasts of a small blind, big blind, and the new giant blind (double the big blind). There are also antes that increase when no players go to showdown.

The hope is that players learn how to adjust to the third blind, increasing antes, and playing a deepstacked strategy.

Our first @PokerStars Deep Water Hold'em Strategy Video is now LIVE! 🤿
OP-Poker James tests out the waters, gives his thoughts on the gameplay itself & dives into strategy!🌊 https://t.co/OkH2wqUtn2

This game was released on November 20 as well.

Tempest Hold’em also offers the three blinds, six-max hold’em tables, and escalating antes when there is no showdown.

The main difference from Deep Water is that Tempest is not a deepstacked game. In addition, there is a cap in games with blinds of $0.25/$0.50/$1.00, for which that cap would be $10. The buy-ins will range from five to 10 big blinds, meaning the focus will be on preflop decisions. It is being called an all-in-or-fold poker game.

James from the @OfficialOPPoker team is here to explain what the new PokerStars Tempest game is all about – https://t.co/B0rvsABRXC

Rasset admitted that the new poker variants are simply innovations based on suggestions from players. The goal is to meet “the expanding variety of other entertainment options the modern world provides.”

However, he assured players that “the classic games that we all love aren’t going anywhere.”

He noted that Deep Water requires a more strategic approach to poker, while Tempest is more of a risk-taker’s game with fast action. “Our goal is to have something for you every time you open PokerStars and to get better with every hand you play.”