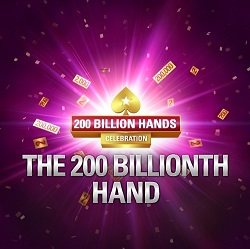 There is one thing about PokerStars that has stayed true in its 18-year history. It doesn’t like to celebrate alone. Rather, the famed online poker operator likes to welcome all players to its celebrations.

The multi-million-dollar promotion welcomed players into the money for weeks prior to the dealing of the 100 millionth hand, which ended up hitting at a micro-stakes table where six players were in a hand at $0.02/$0.05 stakes. The player who won the hand – microulis69 from Greece – won the pot worth $31.55, as well as a prize of $103,800 for winning that 100 millionth hand. Everyone else at the table won a five-figure payout, and more than nine thousand other players also won approximately $84 each.

Now, as PokerStars looks toward its 200 billionth hand online, it is rolling out the promotions.

The announcement of the run-up to the milestone came with news that every player in the eventual 200 billionth hand will win $10,000, no matter the outcome of the hand. No matter if players compete in the hand or fold, whether they are in a tournament or cash game, the payouts will happen.

PokerStars Director of Poker Innovation and Operations Severin Rasset reflected on the number of hands dealt since the site launched in 2001. “These milestones are always emotional for us,” he said, “reminding us of everything the company has achieved over the years and the stories of millions of players who’ve been on this journey with us.”

One of the many promotions leading up to the 200 billionth hand is for cash game players.

From April 15 to April 30, from 12:00 ET to 17:00 ET daily, chests will be dropped randomly once per hour to all tables with three or more players in the hand. The surprise chest will contain a reward worth 20 times the big blind of that table, and all cash game tables are included up to $30/$60 stakes with the sole exclusion of heads-up games. The winner of the hand receives the chest.

The promotion will be extended past May 1 if the 200 billionth hand has not been dealt.

Players in cash games and tournaments, beginning on April 15, will receive a spin on the 200 Billion Hands Celebration Wheel. The promotion will run until May 1 or until the 200 billionth hand is dealt.

Anyone who logs in and plays at least one hand in a cash game or tournament will receive a pop-up with a ticket that can be used to spin the wheel immediately or throughout the remainder of April. Players can then claim another ticket every 24 hours through the end of the promotion.

Daily rewards can be any of the following:

All players who spin the wheel will also receive a ticket to one of the 200 Billion Hands Celebration Freerolls, which will award $10K in prizes each day through May 2. Then, a Mega Freeroll will take place on May 1 for all players, and that tournament will offer a $200K prize pool.

The 200 Billion Hands Celebration $5K All-in Shootout will happen on May 2 for those ticket winners.

Finally, all tournament players will have the chance to win free tickets to tournaments in the upcoming SCOOP series, with values from $2.20 up to $215. This, too, will run from April 15 to May 1.

All of the following tournaments will award tickets at random:

In addition, the Stars Store will be offering special merchandise pricing and giveaways beginning April 23.

In the next two weeks @PokerStars will deal its 200 billionth hand. We're marking this latest milestone, and we'd like you to be part of the celebrations… ?#200BnHandshttps://t.co/UkA0Vng4Bj pic.twitter.com/w7s9d5hefN