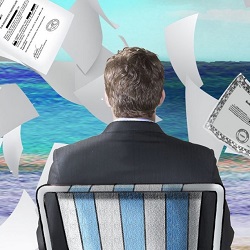 PokerStars risked everything to stay in US market

Yesterday, in the first part of this look at PokerStars’ appearances in the Paradise Papers, the focus was on the company’s ties to PokerNews. Only in the latter part of 2017 did PokerNews admit to a majority ownership by Stars Group, parent company of PokerStars. However, the transfer of ownership happened over the course of years as former iBus Media owner Antanas Guoga sold shares to PokerStars as he took on a role in the European Parliament.

The lack of transparency on the part of all parties about the intimate relationship between the most prominent poker media reporting company and the largest online poker company in the world was a concerning aspect of the Paradise Papers revelation. Most in the poker community were not exactly surprised by the news, as most suspected a close partnership between Stars Group and iBus Media, but the confirmation of its depth and longevity was notable.

However, there was more to the story of PokerStars, according to the Paradise Papers.

The second largest leak of confidential information in history happened when 13.4 million electronic documents were leaked from offshore law firm Appleby to two German reporters at Süddeutsche Zeitung newspaper. The sharing then extended to the International Consortium of Investigative Journalists (ICIJ) to sort through the names of prominent people and companies that conducted shady or seemingly illegal business transactions in order to avoid taxation or hide earnings. The mass of documents was dubbed the Paradise Papers.

The initial findings were released by ICIJ in early November 2017.

PokerStars Risked Everything for US Market

More information was revealed on December 4 about PokerStars and its dealings with Appleby. The title of the revelation by ICIJ was, “Offshore Gamble: The End of Elusion for PokerStars.”

Before Black Friday, as most in poker know, PokerStars was the leader of online poker around the world. PartyPoker had taken a dip when it willingly left the United States market after the passage of the Unlawful Internet Gambling Enforcement Act (UIGEA) in 2006, and a number of other companies followed suit. That left PokerStars as the undeniable global leader of the industry with only Full Tilt as a serious competitor, both grabbing the lion’s share of the US market.

According to an email from Appleby shows that attorneys for PokerStars were very aware that the US Department of Justice could pounce on the industry at any time. That was in early 2010, more than one full year before Black Friday.

The email in question was sent by Nick Verardi, attorney for Appleby’s corporate law practice housed in the Isle of Man, the same location as PokerStars’ headquarters. On February 1, 2010, Verardi messaged other attorneys at Appleby to explain the worries about PokerStars continuing to risk staying in the US market despite actions taken against other online gambling companies by the DOJ.

A portion of the email read:

“Of course, by continuing to take bets from US players there is a risk that the US government may decide to take legal action against PokerStars. However, we understand the US’ approach is likely to soften in the not too distant future with new proposed legislation currently being discussed which would legalise the entire industry. Nevertheless, at the moment, it is an accepted fact that the DoJ, may at its own discretion, attempt to take steps to seize any monies related to online gambling conducted in the US. Therefore, GC has asked us to inquire about the position of other jurisdictions vis a vis their international relationships with the US, and in particular, how your jurisdiction would react to any attempts made by the US authorities, including obtaining injunctions of freezing orders, to seize such Players’ funds.”

In essence, attorneys for PokerStars knew that the US DOJ could seize player funds and shut down the business for the US market. They also knew that player bank accounts had been seized per a DOJ investigation into payment processors that allegedly lied to US banks about online gambling transactions. And per the Paradise Papers, PokerStars requested that Appleby begin “researching offshore jurisdictions to determine which would be most likely to protect the business from US seizure orders.”

Despite the conversations, however, Appleby developed no plan to move money to offshore accounts on behalf of PokerStars.

One day after Black Friday on April 15, 2011, when the US DOJ seized the PokerStars site and all player funds within its accounts, PokerStars released a statement to its players. “Please be assured, player balances are safe. There is no cause for concern,” it read.

That was, in fact, true. PokerStars had segregated its funds to separate player monies from the company’s operating expenses. But Appleby went a step further in early 2011, not long before Black Friday. Before that time and during the prior year when Appleby lawyers were concerned about possible US actions, PokerStars kept all player funds in one account but considered separating funds for US players to keep money for rest-of-the-world players safe from US authorities.

However, the move did not happen. Accounts were established for the purpose of separating US players’ money, but Black Friday happened first. That meant player accounts around the world were seized initially, until PokerStars worked quickly to negotiate the release of player funds and its ability to resume operations to non-US markets.

Poker fans and players may or may not be surprised that PokerStars and its attorneys were as aware of potential US actions as they were. It is interesting, however, to note that despite the worries of attorneys and executives alike, PokerStars continued to operate in the US market. Players, their funds, and their careers (in some cases) were at risk, but PokerStars chose not to leave the lucrative American market and lose the profits from tens of thousands of players on the site per day.

For the most part and to the best of the public’s knowledge, PokerStars and now Stars Group has been mostly transparent in its business dealings, especially now as a publicly-owned and traded company. However, its ownership of iBus Media and its knowledge of US online gambling investigations prior to Black Friday raise questions about the company’s willingness to be completely forthcoming, especially prior to the sale of PokerStars and Rational Group to Amaya in 2014.

At this point in time, it likely matters very little – if at all – to most poker players and fans. The Paradise Papers do provide food for thought, though.