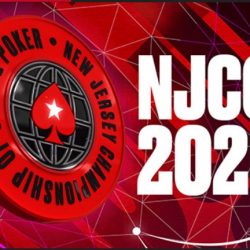 The annual COOP event for the people of (or in) New Jersey is over, and the numbers were big. PokerStars revealed the final tallies for the 2020 New Jersey Championship of Poker (NJCOOP) that took place October 10-26.

The series offered 54 tournaments and $1 million in guarantees. And when the virtual dealer collected the final cards, PokerStars saw that it doled out more than $1.1 million in prize money to thousands of poker players.

It wasn’t all peaches and cream, though. Some of the tournaments didn’t meet their guarantees, which created a nice overlay for players but forced PokerStars to fork over the money to meet those guaranteed prize pools. Even the Main Event had an overlay.

Even so, a win is a win. In a small market like New Jersey, it’s all good.

As mentioned, the overall series exceeded the cumulative guarantee by more than $100K. And the number of entries in the events, including reentries, was solid, too.

Some of the tournaments that missed their guarantees were a bit surprising. For example, Event 2 was a $50 buy-in Warm-Up event with the progressive knockout turbo format. It offered a solid $12.5K guarantee, but the 245 total entries created an overlay of $1,352.50. Event 5 was a Sunday Special with a $200 buy-in and $40K guarantee, but only 193 entries put the prize pool $4,102 short.

Interestingly, the Mini Main Event (Event 48) did surpass its guarantee.

The Main Event (Event 47), however, did not make its guarantee.

There were several players who chalked up impressive accomplishments during the 2020 NJCOOP. Even the Main Event winner, DabledoreNJ, won another tournament in the series (Event 25) and made seven other final tables.

Daniel “loxonbagel” Buzgon won three events in this series to collect more than $13K in prize money. On an even bigger scale, though, he is now second on the all-time New Jersey COOP list of winners with 12 to his credit to date.