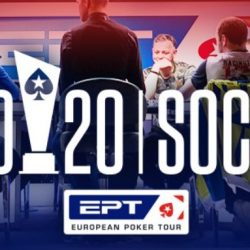 PokerStars hosted an EPT event that wrapped up this weekend in Sochi, and it went well. Casino Sochi implemented precautionary measures. Players and staff were careful. And they finished the live series.

EPT Sochi 2020 was originally on the calendar for March 20-29, 2020. Of course, that little coronavirus pandemic swept the globe in early 2020 and forced PokerStars to cancel the event. The EPT has been on hold – as have been nearly every other live tournament series in the world – since the abrupt stop in March.

Before a second wave of the Covid-19 virus grabbed hold of Europe, PokerStars went for it and offered the EPT Sochi in October. And it was a success.

Considering players’ hesitation (or inability) to travel and play poker in a live setting, PokerStars rescheduled its EPT Sochi action for October 2-11. And that Main Event kept the same buy-in but removed the guarantee.

The schedule for the October EPT stop offered a solid lineup of 25 tournaments, both NLHE and PLO. Players had a wide range of buy-ins and structures from which to choose.

We're back on the road, and you're invited.
ℹ️ https://t.co/Ft5VFTHrZO pic.twitter.com/0ol7aL5Zcz

One of the highlighted events of the series was the EPT National, which required a RUB77,000 buy-in and unlimited reentries. There were three starting flights, which resulted in these totals:

Only 76 players remained to start play on Day 2 with Yuriy Brechalov in the lead. Each was guaranteed a payout at that point.

Brechalov was one of 10 players who did make it through to the final day, though he was no longer the leader. Alik Zazyan was atop the leaderboard, followed by Anatolii Zyrin. However, play was volatile, and Zazyan was the first to bust on Day 3, while Zyrin stayed active and took over the lead five-handed. He ultimately faced Almat Idrisov heads-up, Zyrin with pocket tens that beat the 9-8 suited of his opponent.

The EPT Sochi High Roller event brought players with big bankrolls to the tables. The buy-in was RUB371,000, and players were allowed a single reentry. When registration closed, this was the tournament info:

Day 2 started with 52 players still in action, but registration had not closed at that point. As that second day progressed, the field thinned until the final 13 players were in the money. Play continued until only seven remained with Viktor Kudinov in the lead.

The final table played out with Kudinov losing his lead and being the first to exit. Ultimately, Yakov Fokin and Pavel Kireev made it to heads-up, and the two made a deal for the cash but played on for the remainder of the prize pool and the trophy. Fokin earned it.

The Main Event required RUB175,000 to play, and everyone could reenter one time per flight if they so desired. There were three starting flights, but registration for all remained open until the start of Day 2. When the staff finally tallied the numbers, they were:

Day 2 pulled in the final reentries and, soon after, saw enough people to bust to get the top 95 into the money for at least RUB291,200. Not long after that, play stopped for the day with 85 players and Denis Kushnerov leading the pack.

The next day’s plan was to get closer to the final table. They did that, as numerous players exited to leave just 24 in the mix. Former EPT champion Mikhail Kovalyuk was that night’s chip leader. Day 4 played to the final table as Kushnerov busting in 12th place and Kovalyuk in tenth.

Gleb Ershov led the all-Russian final table of eight players, but short-stacked Aleksandr Denisov had the most experience in poker tournaments by far and took home a spade trophy in a PLO event earlier in the series. Viktor Tkachenko was second in chips and Ruslan Bogdanov in third.

Final table action was an exciting display of poker. Denisov couldn’t do much with his short stack, but Aristov worked his shortest stack into one that kept him in to four-handed play. Ultimately, Ershov busted after Aristov, and Tkachenko and Bogdanov battled for hours of heads-up play. The two had agreed to a chop, but the title and extra cash was all-too important. Finally, Bogdanov and his pocket sixes held to the J-9 of his opponent, and the tournament ended.