PokerStars Founder in Negotiations with US Prosecutors 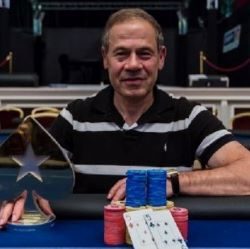 Almost nine years after the United States government issued an indictment against him on five federal charges, PokerStars founder Isai Scheinberg arranged to surrender to federal agents on US soil.

The ordeal was detailed in an informative piece on Forbes last week. Author Nathan Vardi explained how it all started, how federal prosecutors finally tried to extradite Scheinberg in late 2019, and how he finally agreed to fly to the United States with the knowledge that he would be arrested. Vardi also noted that the Scheinberg is already in the advanced stages of a deal with the US government to settle the matter.

Isai Scheinberg was always known as the man behind PokerStars but not much was known about how he actually started the company.

The Forbes article revealed that the Lithuanian-born, Moscow-educated, Israeli soldier worked at IBM after those experiences and then transferred to IBM’s office in Toronto, Canada. His work as a computer programmer was integral in Unicode development.

Scheinberg was a casual poker player and fan of the game, so he developed software for online poker in 2000 under the company name PYR Software. But without success in finding clients, Scheinberg and his son, Mark, launched their own online poker site called PokerStars.

Personally I would say familiarity with brand and let's face it Isai Scheinberg created the best software out there. His involvement in the development of Unicode when at IBM also gave him an edge! https://t.co/P2cu4kI5A4

Initially based in Costa Rica, PokerStars offered a unique range of tournaments, and the site grew. In just a few years, it rivaled PartyPoker for the largest online poker site in the world. When Chris Moneymaker won his WSOP Main Event seat – and went on to win $2.5 million – from a PokerStars online poker satellite for less than $100, PokerStars rose in prominence and fame.

A Long Story in Short Form

PokerStars, along with its rival Full Tilt Poker, ignored threats by the US government to crack down on gambling. When companies like PartyPoker left the US market after Congress passed the Unlawful Internet Gambling Enforcement Act (UIGEA) in 2006, PokerStars was one of four major poker sites that remained available to US players.

Federal prosecutors in Manhattan watched it all develop. They seized tens of millions of dollars from payment processors like Neteller in 2009 and 2010, yet PokerStars and Full Tilt persisted. But when sites began to recategorize online poker transactions as something else so banks would not realize what the purpose of the transactions, prosecutors prepared their case.

They did it all on April 15, 2011, US Attorney Preet Bharara unsealed indictments for 11 online poker and payment processer executives. At the same time, he arranged for the seizure of the websites of PokerStars, Full Tilt Poker, Absolute Poker, and UltimateBet.

One of those indicted was Scheinberg.

Isai is a remarkable man, one of the highest integrity and most decent people I've ever known. The Isle of Man is fortunate to have had him, and I look forward to him being exoneratedhttps://t.co/46z77sCVBI

As PokerStars settled with the US government and even settled a federal civil lawsuit by offering to pay Full Tilt players after that company fell apart under the weight of it all. Part of the deal, however, was that Scheinberg be stripped of all management responsibilities at PokerStars. So, his son took over.

Through the years, PokerStars changed but continued to thrive. Amaya Gaming bought the company in 2014 for $4.9 billion, and with subsequent ownership and location changes, it eventually became known as The Stars Group (TSG) in 2017.

No matter where Scheinberg traveled in the world, he knew that the US was off limits. While there was no particular need for him to be in America, the weight of the pending charges might have been heavy.

During a trip to Switzerland in late 2019, Scheinberg appeared on the radar of US authorities, who decided to move. They put extradition proceedings into play, which Scheinberg initially contested. But whatever transpired in the months that followed into the first weeks of 2020, it resulted in the 73-year-old voluntarily flying to the US.

Upon landing in New York City, he was arrested by federal agents at the airport. He appeared in the Manhattan federal court on January 17, 2020, where he pleaded not guilty. On January 21, Scheinberg posted $1 million to be released on bail.

Per the original indictment, Scheinberg faces five charges. Per the original announcement from the US Attorney in the Southern District of New York, those charges were and still are:

–Operation of illegal gambling business, with max penalty of five years in prison, fine of $250K or twice gross gain or loss, three years of supervised release, and forfeiture of proceeds of offense

–Conspiracy to commit bank fraud and wire fraud, with max penalty of 30 years in prison, fine of $1M or twice gross gain or loss, five years of supervised release, and forfeiture of proceeds of offense

–Money laundering conspiracy, with maximum penalty of 20 years in prison, fine of $500K or twice the amount laundered, three years of supervised release, and forfeiture of proceeds of offense

Altogether, Scheinberg faces a combined maximum penalty of 65 years in prison, three to five years of supervised release, and millions in fines and forfeitures.

With Bharara gone from his position, courtesy of the Trump Administration, US Attorney Geoffrey Berman will oversee the case against Scheinberg.

A January 22 hearing revealed that negotiations are in the works. Federal prosecutor Olga Zverovich noted that Scheinberg and the government were processing quite far. “We have an agreement in principle on the basic terms,” she said.