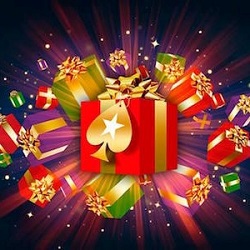 The end-of-year holiday season is a big opportunity or online poker sites to bring the customers to the virtual tables. There are players who don’t celebrate any of the holidays, others who are away from family and friends, and some who simply relish their time playing online poker to get away from family and friends. And then there is the winter weather. No matter the reason, players end up online.

PokerStars decided to bring back its Winter Series and add some extra spice to its existing tournaments, all adding up to approximately $85 million in guarantees through the end of the year.

Last year, PokerStars tried out a Winter Series of tournaments that began on December 25 and ran through January 7. There were 150 tournaments in total with $25 million in guarantees, but the series was such a hit that the prize pools added up to nearly $40 million when all was said and done.

The second edition of the Winter Series will bring that action back, and this year it will begin on December 23 and run for 16 days through January 7. There will be 60 events with buy-ins to accommodate a range of players ($0.55 up to $5,200), and the entirety of the series will guarantee $40 million.

Winter Series returns on @PokerStars this month with the first event starting 23 December.

The finale alone will offer four different tournaments on January 6:

There are new features in this year’s series, including two $5,200 buy-in events, each with a $500K guarantee, for those who didn’t spend all of their money on gifts, with one on December 26 and the other on January 2. In addition, there will be turbo and hyper-turbo tournaments on Christmas Eve and New Year’s Eve.

Some of the action will be livestreamed throughout the series on Twitch.

With the Winter Series offering $40 million in guarantees, where is the rest of that $85 million? It will appear in the guarantees that abound in the normal tournament schedule.

PokerStars is also offering special Spin & Go’s at the $2.50 and $20 buy-in levels that will award tickets to a number of tournaments, including the high buy-in version of the Winter Series Main Event.

Many poker fans had reasons to look forward to holiday promotions that typically begin at the start of December, such as the Christmas Calendar. There were hints that it would appear for a December 1 kickoff in major markets, especially the dot-com market, but that never happened.

5/ PokerStars has apparently made the curious decision to make their big Christmas Calendar promotion available to select customers only. This may just be temporary, but it marks the first time in quite some years the operator hasn't kicked off Dec with a big promo.

What is worse is that only certain players may have been eligible to receive special Christmas promotions. It is unknown to what extent that happened or what criteria was used to determine which players received that opportunity.

Hi Brendan, please send us a direct message with your StarsID, full name, date of birth, registered phone number, address and email address. We will check if your Stars account is eligible for a Christmas promotions. Thanks ^MS

Pokerfuse noted again that there have been changes to the PokerStars client that indicate a Christmas promotion could still be awaiting an announcement, but the holiday-themed tables and specialty graphics could simply be deployed during the holiday season without accompanying a particular promotion.

New Jersey Gets It

Players in the New Jersey market can complete tasks each day to earn a calendar door, behind which is an instant prize or a special key, the latter which could open a special Christmas Calendar chest on December 25 that could be worth up to $50K.

That promotion will be accompanied by the New Jersey version of the Winter Series, which is called the Carnival of Tournaments. It begins on December 17 and runs through December 23, complete with a $200 buy-in Main Event with a $50K guarantee.