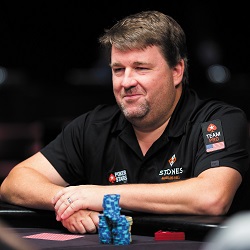 As the 2018 World Series of Poker Main Event began in Las Vegas this week, PokerStars took the opportunity to recognize a special anniversary. It was 15 years ago that Chris Moneymaker won an online poker satellite at PokerStars that cost him $86. He transformed that victory into a trip from Tennessee to Las Vegas, a seat into the Main Event worth $10,000, and a victory of $2.5 million and a shiny, gold, one-of-a-kind championship bracelet.

For those who watched it happen, it was momentous. (It was 15 years ago, so some of us feel a bit old talking about it. But we digress.) For those who have since learned about it and watched the video, seen the photos, and read the accounts, it will always be one of the most important moments in the game. Whether Moneymaker’s journey inspired or motivated us, gave us chills or made us smile, it was at the very least special and historic.

This may not scan for everyone, but the spring of 2003 was a @CMONEYMAKER media bonanza. Articles ran in my hometown, my adopted hometown, and all over the world. pic.twitter.com/vbaOxbX6Bb

To celebrate the 15th anniversary, PokerStars is introducing a new US-based poker tour with low buy-ins and big prizes.

The tour is called the Moneymaker PSPC Tour, with the PSPC representing the PokerStars Players No Limit Hold’em Championship. That tournament is set for January in the Bahamas… Let’s take a step back to explain.

Moneymaker created this tour as an ambassador for PokerStars, and PokerStars is sponsoring it. The idea is to give players the chance to replicate Moneymaker’s win in 2003 by turning $86 into $2.5 million.

The first step will be to buy in to any of the tour events for $86 and win, and that victory will be accompanied by a special Platinum Pass worth $30,000 to play in the PSPC in the Bahamas in January 2019. Platinum Pass winners will also receive preparatory support from Moneymaker in the lead-up to the January tournament.

The tour will begin on Saturday, August 4, and the ninth stop will wrap the events on October 14. Moneymaker will be at each stop to chat with and play against those in attendance. The schedule is set as follows:

That makes available $270,000 worth of Platinum Passes, one for each of the winner. And those nine players will then be invited to use those passes in January.

So excited to host and play in these event with everyone. #PSPC #PlatinumPass. #MoneymakerTour. https://t.co/gq86eG9fiG

Moneymaker noted, “It’s been 15 years since the big win and it only feels like yesterday. It was one of the most incredible experiences of my life and I want to give someone else the opportunity to feel that #winningmoment. I’ve played a lot of poker for years, and during that time, I’ve gotten to know lots of people at live events and meet-ups. Now US fans will have the chance to win an amazing prize and have some fun along the way.”

The immediate Moneymaker Effect in the 2000s was the poker boom, a time when millions of people were introduced to the game of poker – both online and live – and the industry thrived.

One of the direct effects of Moneymaker’s win was the popularity of the online satellite. While all of online poker benefited, online satellites gave players the opportunity to win seats into events from the World Series of Poker to the World Poker Tour or European Poker Tour. They won prize packages to the Bahamas and Monte Carlo, and to Las Vegas and Paris. A few dollars invested into an online poker tournament garnered the chance to win a sizeable prize package that took players around the world.

The industry has declined in overall size and scope since then, at least as compared to the days of the poker boom, but several online sites never gave up. PokerStars is one that has rolled with the regulatory punches through the years, taken its lumps and risen again, and that brought it back to the US market where it operates in New Jersey.

And while PokerStars makes its slow but steady comeback in America, it is taking the opportunity to remind players of the Moneymaker Effect and the poker boom.

Hey, USA folks…you’ve been asking about when you can win a #PSPC #PlatinumPass. Well, here is your chance. Or actually, here are a LOT of chances, courtesy of @CMONEYMAKER and his #MoneymakerTour. https://t.co/cjMzmFmfrO pic.twitter.com/oVpukbYAKO