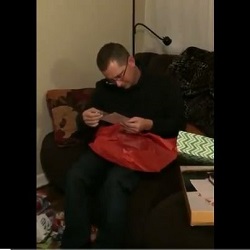 It was Christmas Day. Many poker players were gathered with family and friends to play a little poker at the kitchen table, maybe for coins or candy.

Poker player Joey “Clause” Ingram was scanning Reddit for poker threads, obv. He found a story that quickly went viral in poker circles on Twitter, a short video of a woman who gifted a WSOP trip to her husband for Christmas, which brought him to tears. And while many in the poker community were finding their hearts warmed and memories of poker passions revived, Ingram was challenging the largest online poker site in the world to take it a step further. A giant step further.

A Gift of Love

At first, the names weren’t important. Ingram found the video on Reddit and posted it on Twitter, as it symbolized what poker truly means to so many people. While pro players often get caught up in debating the minutia of the game – shot clocks, big blind antes, etc. – it is easy to forget why they began playing poker in the first place and what inspires others to join the ranks. The video prompted poker players of all stripes to admit to being all up in their feelings over this one.

This is epic!! Merry Xmas!! From Reddit, a wife gave her husband a trip to the WSOP & this was his reaction! This is the 1st year they could afford to go.

I offered to give them a proper WSOP tour, introduce them to some players & maybe help get him staked into an event!! pic.twitter.com/vFnb1G2eGs

The woman gifted her husband a trip to the opening of the World Series of Poker in Las Vegas in 2019. She purchased the plane tickets and hotel accommodations at the Rio, and she offered the buy-in to the opening event of the 2019 WSOP, the Big 50, a $500 buy-in anniversary tournament with a $5 million guarantee that will kick off the 50th edition of the series.

Ingram offered to give them a tour of the WSOP and introduce them to some of their favorite players. Well-known poker pros immediately began to respond with offers of coaching. Others, possibly inspired by Ingram’s tweet, began conversations about staking the man in the video in larger events, with many talking about the $10K Main Event later in the summer.

Word traveled back to the poker couple from the video quickly, and they revived their Twitter accounts that had seemed to have been dormant for several years. Randi Hilsercop emerged first, and the woman who purchased the poker gift was overwhelmed by the support she found on Twitter.

Soon after, her husband figured out his Twitter password and emerged as well. Jeremy Hilsercop was working to process all of the attention.

My wife remembered my old password lol. Thank you Joey, again I don’t have the words yet, still taking this all in

A little backstory is required.

Ingram has often been a fierce critic of PokerStars. Ingram has no ties to poker sites or corporations that keep him from expressing his opinions, and he often uses his wildly popular YouTube channel to express concerns about the business of poker.

A man named Arlie Shaban had been working through a challenge issued by PokerStars in order to win a Platinum Pass, which is a $30K prize from PokerStars that includes a trip to the Bahamas and accommodations for the upcoming PokerStars Players No Limit Hold’em Championship. The pass, most importantly, includes the $25K buy-in for that tournament, one that looks to be the largest of its kind in the history of the game. PokerStars will be adding $8 million to the already-escalating prize pool of millions, and an additional $1 million will be awarded the winner over and above the official prize amount.

Shaban had been close to winning his Platinum Pass, and his final challenge to win was to convince Ingram to accept a complimentary pass of his own. This proved to be a difficult one that sent Ingram into a whirlwind of public debates and thoughts about whether or not to accept the pass. Would he be considered a sellout? Would he forfeit his impartial reputation?

When Ingram saw the video of Jeremy’s emotional reaction to the gift of a trip to the WSOP for a $500 event, he upped the ante. He told PokerStars that he would accept its gift of a Platinum Pass if the company assured Shaban his pass and offered one to Jeremy.

And PokerStars snap-called the offer.

We don’t need to go into the tank on this one @Joeingram1 – Snap Call, let’s make this a Christmas to remember for Jeremy and Arlie.

The reaction from the Hilsercop husband and wife showed the overflowing excitement.

Oh my gawd oh my gawd oh my gawd!!!!!!! I can’t believe this I’m at a loss of words the generosity and love we are receiving has been….. I have no words. Oh and @JeremyHilsercop has reactivated his twitter for this lol I’m dying??????? https://t.co/MjXkVPvhEG

An Abundance of Assistance

The Hilsercops live in Murfreesboro, Tennessee, and they don’t currently have passports, a necessity to fly to the Bahamas for the January 6-10 tournament.

Enter none other than Chris Moneymaker, who also hails from Tennessee and offered to pay for and help with the particulars of obtaining passports.

Bad news for @Randi_heatlifer @jhilsercop who just won a platinum pass from @Joeingram1 they don’t have passports!!!!

Good news if someone can do the research on if it is feasibly possible for them to get the passport by Jan 5 I will pay the fees to get done for them. #holidays

Hundreds of people then chimed in with information as to how they can obtain expedited passports, and the details began to come together.

Meanwhile, poker pros who are also headed to the Bahamas next week offered their assistance via coaching, advice, and anything else the couple may need. Needless to say, the Hilsercops were again overwhelmed by the outreach.

Omg thank you!! I’m a huge fan and this is amazing! And you are amazing!! Ahhh ❤️❤️❤️❤️ pic.twitter.com/0xPuoNlH4j

The offers continued to come late into Christmas night. It goes without saying that the couple spent the late-night hours trying to absorb what happened. For a man who’s held his poker passion since playing for pennies at the age of 12 but had never been able to afford the time or buy-ins for major tournaments, as he always put the needs of his family first, the dream was turning into a reality. And the woman who started it all by giving him the gift of a lifetime had no idea how her thoughtful present would captivate the attention and hearts of the poker community.

Hey thank you so much for this. This has been amazing and wonderful and we haven’t stopped crying/being happy. I have no words for how great this is. Thank you

And while they will likely continue their messages of gratitude in the coming days, many of us in the poker community would like to thank them. The initial emotional video of a simple poker gift reignited some of our feelings about poker that may have faded through the years. And the generosity that exploded as a result of that video will keep some of us smiling for a long time to come. Brad Willis captured much of this in a post yesterday on the PokerStars blog.

Folks…if you ever wanted to know just how good the poker community can be, let us point you to this Christmas story. Absolutely wonderful. Thanks to all involved. https://t.co/mKGDD37Q0H pic.twitter.com/20XThEUTg1

Thanks, Randi and Jeremy, Joey and PokerStars, from this longtime poker writer whose cynicism has sometimes gotten in the way of remembering the good in this community.