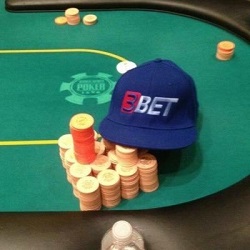 For years, poker players could be seen at major tournaments wearing 3Bet gear. The original shirts and jackets were admittedly very comfortable, and it wasn’t uncommon to see players like Antonio Esfandiari, Brian Rast, Scott Clements, and Jason Koon sporting the 3Bet logo.

The company also had a booth in the hallway of the Rio during the World Series of Poker for years, offering an alternative to the WSOP gear.

But 3Bet Poker Clothing made a recent decision to shut its virtual doors. After being in business for approximately eight years, the final products in the store are on sale, all marked for clearance to empty the shelves and lock the doors.

Two poker players opened 3Bet in 2011 as a Los Angeles-based business. Dan Spring and Kevin Talbot launched the company as an alternative to the few poker-themed apparel businesses in existence at the time, an option with well-made clothing and fresh styles that appealed to poker pros who spent long hours in poker rooms.

The website boasted of “fashion with functionality” and “apparel with an attitude that fits our playing style.”

Both Spring and Talbot had previous experience with apparel companies, a combined total of 25 years in fashion, and both were also poker enthusiasts.

When they first introduced their clothing, many poker players were anxious to get involved, either by simply wearing the hats, hoodies, and shirts or through sponsorships. By 2012, the company built Team 3Bet, which included Brian Rast, Jonathan Little, Greg Mueller, David Sands, John Phan, Scott Clements, and then Antonio Esfandiari, who officially joined after he won the 2012 Big One for One Drop at the WSOP for $18 million.

Others signed on to be affiliated with the company in the years that followed, like Jason Koon, Jeff Gross, and Ben Tollerene, with Phil Hellmuth eventually getting on board as well. The clothing could be found on players in nearly every tournament.

As of early 2019, the company hadn’t been doing the business it once did, and the market for such apparel seemed to have faded. That was when a message from the owners to the customers appeared on the 3Bet website:

“Our mission from Day 1 was always to give poker players another way to further connect with the game we all love and while we’re disappointed to be moving on, we’re proud to have accomplished that goal for thousands and thousands of players around the world over the last 6+ years. We hope you wore your 3Bet gear with as much pride as we took in making it!

“Thank you to all our customers and fans and thank you to the poker community for the support – it’s been a great ride.

“We hope that you take advantage of our clearance sale and load up on great 3Bet gear one last time.

“As they say in poker, and in entrepreneurship… On To The Next One.”

The website currently offers all remaining items marked down 50%, and all sales are final at this point. The final clearance sale will end when the stock is sufficiently depleted. Many items are already out of stock, so it likely won’t be long.

Some news: 3Bet will be shutting down in the coming weeks. Gear up one last time with everything 50% off (coupon code “Fold”). Thank you to all our customers, fans, and the entire poker community for the support over the years. https://t.co/DWPLDnvUW7 #poker pic.twitter.com/dSwprocRwN