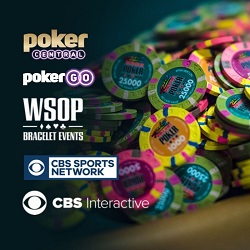 The 2019 World Series of Poker was going to offer a fair amount of coverage via online live streams, courtesy of its affiliation with Poker Central. PokerGO was to be the platform by which poker fans around the world could log on and view some of the final tables and WSOP Main Event coverage.

Poker Central just took that plan to a new level.

Today, CBS and Poker Central announced a partnership to stream more coverage than originally anticipated on several platforms. Poker fans will now have several choices for viewing action, as there will be a total of 41 days’ worth during this summer’s WSOP.

This revelation has the potential to draw many more viewers than in years past and deliver more content than anyone expected. For those who want all access, they will have to spend more to view both channels, but the total comes to less than $16 per month for the most ardent fans.

Can you handle it? 41 days of @wsop bracelet event coverage thanks to a new partnership between @cbssports and @pokergo! https://t.co/UPs5xsJrpi

The Poker Central partnership for the 2019 WSOP includes a number of platforms through which viewers can watch events this summer.

In addition, there will be some content in the form of video highlights on CBSSports.com, the CBS Sports mobile app, and the CBS Sports HQ streaming sports news network.

The official broadcasters will be Lon McEachern, Ali Nejad, and David Tuchman, but other poker pros will be added throughout the summer to provide additional commentary.

CBS Sports Executive VP of Programming Dan Weinberg noted, “The World Series of Poker, which is the pinnacle of the game, will be a fantastic addition to our digital and cable channels. We’re very pleased to bring this engaging content to poker fans across platforms.”

Of the 41 total days of live coverage, there will be 25 available exclusively on CBS, eight exclusively on PokerGO, and eight shared by both platforms.

The following schedule is in Pacific Standard Time and indicates final table coverage, each tournament on a mandatory 30-minute delay per gaming regulations: