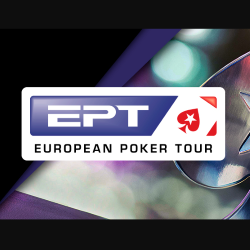 When the European Poker Tour (EPT) began in 2004, creator John Duthie couldn’t have imagined that it would still be alive today. PokerStars owns the tour and continues to keep it operating across Europe, now in its 15th season.

As a part of the current season, the EPT Prague brought players to the Czech Republic from December 6-17, 2019. Nearly 50 tournaments, not to mention cash games and other activities, provided plenty for the players to do on and off the felt.

And while many players won sizeable amounts of money and prestigious titles, one player made EPT history. Mikalai Pobal of Hungary won the EPT Main Event, becoming the second player ever to win two EPT Main Event titles after Victoria Coren.

Out of all of the tournament options at EPT Prague, the €5,300 buy-in Main Event was…well…the main event. It got underway on December 11 with 391 entries, and another 745 came in on Day 1B the next day. And when late registration closed when Day 2 began, the final numbers were:

Day 2 brought back 395 survivors from the starting flights and a few new entries. The money bubble burst late that night, leaving 141 players to bag their chips.

Day 5 started with some quick eliminations, including Dominik Panka in 10th place for €62,070. Dietrich Fast busted in eighth place, and the final five packed up to play the final day on December 17. Gaby Livshitz had the chip lead, and Mikalai Pobal was the second-lowest in chips.

On the final day of play, Norbert Szecsi battled Livshitz for the lead for hours. Tomas Paiva was the first to depart at the hands of Livshitz. Pobal was on a short stack for some time but did double through Livshitz twice to stay alive. Pobal then did it a third time to climb into the chip lead before eliminating Livshitz from the tournament in fourth place. Szecsi ousted Da Rocha in third place.

Szecsi took a lead into heads-up play with 18,385,000 chips against the 16,215,000 of Pobal. But the latter quickly took over the lead and ran away with it. Szecsi then pushed all-in with eights but found that Pobal had kings. The board changed nothing, and Pobal won.

Pobal became only the second EPT winner in its long history to capture a second EPT Main Event. He claimed his first title in Barcelona in 2012.

After that victory, per the PokerStars blog, Pobal fell away from poker, rarely playing live tournaments anymore. But when he won an online poker package on PokerStars for only €50, he decided to bring his family to Prague for a holiday.

It turned into a lucrative holiday, as Pobal won more than €1 million.

EPT Prague was not short of high-stakes tournaments. Here are the final numbers of those tournaments with €10K or higher buy-ins and their respective final table players:

The last four were money-list leaders in the UK, France, Spain and Ireland — and it was Stephen Chidwick who came out on top. Read how the British No 1 won €725,710 at #EPTPrague and became poker's highest earning European. https://t.co/d4lkrY6Rzb pic.twitter.com/s4iOm93mpc

Congrats to Tsugunari Toma, he took down the #EPTPrague €10K High Roller, defeating a field of 255 entries to win €523,120. pic.twitter.com/YwfWbxEC9A

The day's action has wound down at #EPTPrague.