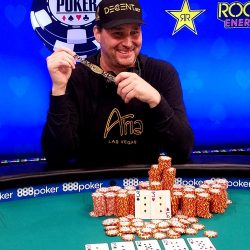 As the WSOP Main Event played down to the final table, Phil Hellmuth made history once again winning his 15th WSOP bracelet. Hellmuth defeated Steven Wolansky heads-up in Event #71: $5,000 NL Hold’em (30 minute levels) to extend his record for career bracelets.

Phil Hellmuth hadn’t been having the best summer at the 2018 WSOP prior to Event #71, $5,000 NL Hold’em (30-minute levels). He hadn’t come close to sniffing a final table and had been under heavy fire for various antics that included a controversial tirade during the Main Event.

Hellmuth managed to bag a big stack during this event and Day 2 action started with 39 players. With a mix of luck and solid play, Hellmuth managed to make his way to the final table and started second in chips. Also joining him were bracelet winners Paul Hoefer and Steven Wolansky. Matt Glantz was another notable at the final and was looking for his first bracelet.

Hellmuth stayed near the top of the counts most of the final table but found himself as the short stack three-handed. He then doubled through Alan Sternberg when his As-5d outflopped Sternberg’s pocket kings. Sternberg later was knocked out in third, leaving Steven Wolansky and Hellmuth to battle heads-up.

At the start of heads-up, Hellmuth was facing a 3:1 deficit but he soon found a double when his As-Ks held against the Qs-10c of Wolanskly. Hellmuth got close with that double but Wolansky retained the chip lead. He started to pull away again but Hellmuth found the perfect time to catch lucky.

Hellmuth was all-in pre-flop with Kd-10d and in bad shape against the Kh-Jh of Wolansky. Hellmuth managed to flop a flush draw but was still behind. The turn Qc missed both players but a 10c on the river gave Hellmuth a full double to 8.3 million. He now had more than a 2:1 chip lead.

A few hands later, Wolansky looked down to Ad-9c and moved all-in. Hellmuth woke up with pocket threes and made the insta-call. The flop fell 9s-3c-2h and Hellmuth’s rail erupted. He reminded them that the hand wasn’t over and that running wheel cards along with other cards to give Wolansky a better boat was out there. However, the turn fell the 6d and Wolansky was drawing dead.

Just like that, what looked like a wash of a summer turned out to be another chapter in the storied career of the greatest champion in WSOP history. In addition to his 15th career WSOP bracelet, Phil Hellmuth won $485,082 in prize money.

The following video tweet could not have said it better:

The first event to play to a conclusion early Wednesday morning was Event #69, $3k PLO Six-Max. The final day of action began on Tuesday with 24 players looking to take down the bracelet. Among those still left in contention at the start of the day were Brock Parker, Matt Stout, Martin Kozlov, Jan-Peter Jachtmann, Alex Bolotin, and Phil Galfond.

Keijzer and Lewis managed to maintain their chip position and made it to heads-up play with Keijzer leading by just six big blinds. It didn’t take long for the event to play to completion after a pair of big hands went Keijzer’s way.

Keijzer had a 2:1 chip lead heading into the final hand and a straight-over-straight confrontation brought the event to an end. On the river, Lewis managed to catch a wheel but little did he know that he was drawing dead from the turn as Keijzer turned a Broadway straight. Lewis finished runner-up, earning $293,553.

Ronald Keijzer hails from the Netherlands and became just the fifth Dutch player in WSOP history to win a bracelet. He normally only plays PLO cash games but came out to the WSOP specifically to try his hand at tournaments. Well, we are likely to see him play more events in the future after earning his first bracelet along with $475,033.

The second bracelet event to complete on Wednesday was the $3,000 Limit Hold’em Six-Max. Limit Hold’em isn’t exactly the most popular form of Hold’em but this event still pulled in a solid field of 221 players.

Despite being a six-max event, the final seven players returned to play a seven-handed final table. Among the notables returning were Juha Helppi and three-time WSOP bracelet winner Barry Greenstein.

Won Lee was the final table bubble boy when his A-Q was outdrawn by Justin Thurlow’s Ad-3d on the river. Barry Greenstein started the day as the short stack of only about five big bets. Soon, he found pocket sixes and put in the rest of his chips pre-flop after a raising war with Yaser Al-Keliddar. Al-Keliddar had pocket kings and those kings were good enough to send Greenstein to the rail.

Yaser Al-Keliddar wound up making it heads-up in this event against well-known Finnish pro Juha Helppi. Al-Keliddar started with a 2.3:1 chip lead over Helppi at the start of heads-up action. Nothing went Helppi’s way and soon he found himself down to about two big bets.

Helppi put the last of his chips in with 10s-4d but ran into pocket fours from Al-Keliddar. The board failed to produce a ten and Helppi finished in second, good for $95,380.

Prior to this event, Yaser Al-Keliddar only had $145k in career earnings. His largest cash came late last month when he finished 15th in a Wynn Summer Classic event for $19,842. The Virginia resident has a lot of Maryland Live! scores on his resume but now he has taken down his first major live tournament. In addition to winning his first bracelet, Al-Keliddar earned $154,338, doubling his live career earnings.