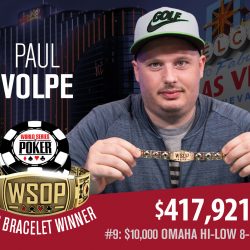 Heading into the final day of the Omaha Hi-Lo Championship, only six players remained and Eli Elezra held the chip lead. He was looking to bag his four career bracelet, but standing in his way were two-time bracelet winners Paul Volpe and Viacheslav Zhukov. Also, Dustin Dirksen, Adam Coats, and Kyle Miaso were all looking to snag their first bracelets.

Elezra, Volpe, and Coats started the day as the top three stacks and ended up being the final three left battling for the bracelet. Coats found himself the short stack with three players remaining and steadily slid until he had less than three big bets remaining.

Coats woke up with Ac-Ad-Ks-Qd in the big blind, Elezra limped from the small blind with Qc-9c-9h-6h and the pair saw a flop of Js-10d-10h. Naturally, Coats put the rest of his stack at risk on the flop with two pair and a wrap draw. The turn 6s changed little but the river 8d gave Elezra a straight and sent Coats home in third.

Heads-up play started with Paul Volpe holding the chip lead. He had 4.96 million against the 3.48 of Elezra. Volpe seized momentum early after winning the first three hands of heads-up play and from there, he could do little wrong.

Elezra’s stack continued to shrink until he only had about two big bets left in his stack. Finally, on a flop of Qd-Jh-9c, Elezra put his stack in with Kd-Jc-7h-5s for a pair and a straight draw. Volpe had Ad-10d-8h-3h for a straight. Only a ten would save Elezra. The turn Qc missed both and the 3d on the river gave Volpe the win and the bracelet. Elezra received $259,297 for his runner-up finish.

Paul Volpe won his third career bracelet in this event and $417,921. This was his second final table of the series and third cash overall this summer.

Only 15 players remained heading into Day 3 of the $1,500 Dealer’s Choice. Jeremy Harkin started the day as the chip leader but there was a strong field remaining including John Hennigan, Mike Leah, Jeff Lisandro, Jimmy Fricke, Chris Vitch, Frankie O’Dell and actor James Woods.

Only six players would make the final table and many big names fell on the way to the final including Chris Vitch (13th), Jeff Lisandro (11th), Mike Leah (10th), and John Hennigan (7th).

Jeremy Harkin and George Trigeorgis were the chip leaders heading into the final table of this event. Frankie O’Dell was the only former bracelet winner making the final and looked to win his third bracelet. James Woods made his second career final table in this event while Anthony Arvidson and Scott Abrams were the short stacks.

Abrams was the short stack with just two big bets and finished in sixth when his split deuces were unable to outrun the split sixes of George Trigeorgis during a Stud hand. James Woods fell during a hand of PL 2-7 Triple Draw when his 9-8 was outdrawn by the 9-6 of Jeremy Harkin.
Anthony Arvidson fell during a PL 2-7 Triple Draw hand against Harkin. Harkin had a pat 10-6 during the final draw and Arvidson had 7-5-3-2. He paired his 3 to finish in fourth.

PL Triple Draw seemed to be the game of doom in this event as George Trigeorgis fell during the game. A few hands earlier, he lost most of his chips to Frankie O’Dell in Big O when his flush was outdrawn on the river by O’Dell’s full house.

He ended up taking another cooler in his final hand. Each player drew one and stood pat until the end. O’Dell showed 8-6-4-3-2 and Trigeorgis angrily slammed his 8-6-5-4-2 on the table, losing by a single card.

At the start of heads-up play, Frankie O’Dell held 1.75 million chips to 1.28 for Jeremy Harkin. Heads-up play ended up being a spirited content seeing both players hold the chip lead multiple times. Eventually, Harkin put together a series of wins playing Omaha Hi-Lo and O’Dell had less than two big bets in his stack.

The final hand was played Big O and on the flop of Qc-Js-8h, O’Dell put in the rest of his stack. Harkin called with Ac-As-8s-7s-6d and O’Dell showed Ad-Qd-6s-6c-5d. The turn 7c gave Harkin two pair and a stranglehold on the hand. The river Ks gave Harkin the hand and the bracelet.

Jeremy Harkin survives a tough final day in this event to snag his first gold bracelet and $129,882 in prize money.

Two events will crown champions on Thursday. Sang Liu and Scott Margereson lead the final table of the COLOSSUS. John Racener will headline this final table and is looking to take down his first bracelet and the $1 million top prize.

Meanwhile, Shaun Deeb headlines the final of the $1,500 2-7 Draw. He’s looking to win his third bracelet. Other events resuming on Thursday include the $1,500 Big Blind Antes NL Event. Dutch Boyd leads with just 29 remaining. Shaun Deeb is also still alive in this event but he is one of the short stacks. Ankush Mandavia is the only other bracelet winner still alive in this event.

You could look this good in @BlueSharkOptics too. But can you play this good? #Shark @DutchBoyd @1st pic.twitter.com/fa6COWRYvh

One of the featured events tomorrow will be the $10k Heads-Up NL Hold’em Championship. Day 1 played out on Wednesday and the field of 114 was thinned down to just 16 players. Among those advancing to the Sweet 16 are Justin Bonomo Scott Seiver, Niall Farrell, Julien Martini, Galen Hall and Jason Mo.