PartyPoker Powerfest in Progress Through March 29 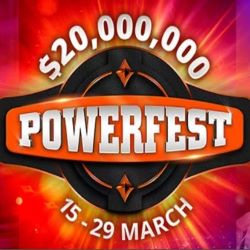 The 488-event series started on March 15 but runs through March 29, giving players plenty of time to participate and take advantage of some of the $20 million in prize pool guarantees.

The fun thing about POWERFEST is its mass appeal. Players can find buy-ins that range from $0.55 all the way up to $25K.

POWERFEST began on March 15 with $20 million in promised prize pools over the course of 145 events. But each of those 145 events have numerous versions, from Micro to Low, Medium, High, and High Roller.

For example, on Sunday, March 22, players can choose from the following events:

The above listings are only a portion of what will be on the schedule tomorrow and going forward.

We were guaranteeing $20,000,000 for #POWERFEST but as of yesterday we've upped event guarantees by 25-100%. Now is a better time than ever to play! See todays schedule at https://t.co/ekNkOtgMs8 pic.twitter.com/VgXzWk58OS

The last day of action will be Sunday, March 29. And it will be the biggest day of the series by far, complete with several versions of a series finale.

With the lack of live poker tournament options across most of the world right now due to coronavirus shutdowns, expect bigger numbers each day in this current POWERFEST.