PartyPoker Bonds with eSports in The Big Deal 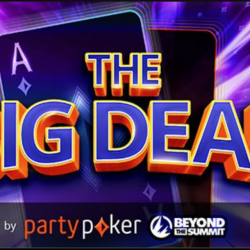 Online poker is popular. Esports is more popular. These are facts.

There are some poker players who cross over into the esports world – and vice versa. There have even been some attempts by online poker sites and tour operators to forge relationships with esports players and/or entities. Most have not taken hold in any long-term fashion, but the outreach is typically positive.

PartyPoker just did something along those lines, and it seems to have gone well.

Reaching Beyond the Summit

Many in poker may not be familiar with Beyond the Summit. The company seems to be the esports version of the PokerGO Studio in Las Vegas. Beyond the Summit was originally founded in 2012 to focus on casting for DOTA 2, a popular online video game. (DOTA represents the original Defense of the Ancients game.)

As esports grew, Beyond the Summit did, too. It became a full-fledged DOTA 2 studio and then one that works with numerous games and grands. BTS now creates esports content recognized all over the world.

PartyPoker reached out to BTS to do a bit of a crossover event. And PartyPoker put up a $50,000 prize.

Kind of a Big Deal

The action was a livestream on Twitch. In exchange for PartyPoker putting up the $50K, the action went to its Twitch channel, PartyPoker.tv.

PartyPoker and BTS extended invitations to some of the world’s top streamers, one that pitted 48 of them against each other at online poker tables. And Maria Ho and Joey Ingram represented poker through the BTS Twitch studio in Los Angeles.

The freeroll gave each player the chance to “reenter” for free three times before an official elimination. And the structure was one allowing many breaks and quickly-escalating blinds, since the entire event was mostly for entertainment.

POKER FANS… Want to watch the best poker and gamer streamers go head-to-head live for a top cash prize in a $50,000 Invitational tournament? Tune in on Saturday 5pm GMT for all the action in #TheBigDeal on https://t.co/KaMdZfBx8X. Read more at https://t.co/RHPPax86AZ pic.twitter.com/BF9BGO9jWg

The list of participants included some well-knowns from the poker world, some of whom were also PartyPoker ambassadors.

PartyPoker provided a full list of all 48 competitors by their Twitch channel names and with links to those channels.

Of course, the cash was a big incentive for players to participate, but they all put something else up for grabs. When one player knocked an opponent out of the tournament, they would be able to raid their viewers.

No matter which livestream one might have been watching, it was a fun game.

Prior to the final table, Elias “ZerosPoker” Gutierrez busted Jaime Staples and Ebony Kenney in one massive hand.

POKER FANS… Want to watch the best poker and gamer streamers go head-to-head live for a top cash prize in a $50,000 Invitational tournament? Tune in on Saturday 5pm GMT for all the action in #TheBigDeal on https://t.co/KaMdZfBx8X. Read more at https://t.co/RHPPax86AZ pic.twitter.com/BF9BGO9jWg

We lose @courtiebee in 10th place in The Big Deal after a brutal cooler against @ichoGAMING. 😭😭

We're streaming all the action from the final table on https://t.co/E5kBpU4h8Y. Or you can watch any of the finalists streams. pic.twitter.com/QWOxarnaK3

That delivered a final table mixed with poker pros and gamers.

Here's a handy list. If you want to watch the final table of The Big Deal from any of the finalists perspectives, just find their twitch info in their twitter bio. Why not follow them while you're there😉. Thanks @Kevmath! https://t.co/FWYpGTOv6M

The final table itself offered $41K in prizes, and “MaximusBlack” took charge to oust the first player from that group. Jeff Gross then busted in seventh after a solid showing via his ambassadorship.

We lose @JeffGrossPoker in 7th place of The Big Deal! If you want to join us to see who will win the first ever Big Deal then join @MariaHo and @Joeingram1 on https://t.co/E5kBpU4h8Y or watch one of the finalists on their Twitch stream. pic.twitter.com/SzAlOREyEb

Fast play quickly led to four-handed action, at which point “MaximumBlack” busted to “AKT_ZeroS.” Sadly, his musical stylings went with him.

Now THIS is the kind of energy you want when you make the final table of The Big Deal. @LAGTVMB crushing it on the tables and on the mic🎤!

Watch how Maximus gets on by tuning in to his stream or https://t.co/E5kBpU4h8Y. pic.twitter.com/abuBNT03n9

Niklas “Nikkymouse” Ehrenholz, a German ambassador for Natural8, then took out ZerosPoker to make it to heads-up play.

And we are heads up in The Big Deal! @ZerosPoker falls to @NikkyMouseee and takes home $6,000. Nikky also picks up the 3000 viewers that Zero had!

Ehrenholz had a massive chip lead over “BroughtCabbage” and didn’t hesitate to take those chips into the winner’s circle.

We have our winner of the inaugural The Big Deal. Congratulations to @NikkyMouseee who takes home $12,000 and all the viewers!

Thanks everyone else for tuning in and being a part of The Big Deal. pic.twitter.com/sW67SXhBBq

Ultimately, PartyPoker issued these payouts to the final table finishers: