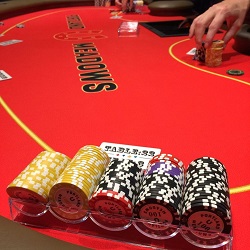 Poker in Oregon is in a state of flux. And it may be the Oregon Court of Appeals that decides the fate of more than a dozen live poker rooms across the state.

After nearly two years of warring with words and threats, the Oregon Lottery took a stand against Portland Meadows, a racetrack that offers pari-mutuel wagering, video lottery terminals, poker, chess, esports, and fantasy sports. That poker room operates as a social game, one that takes no rake or fees from players but does charge an entrance fee. But the Oregon Lottery asserted that the poker room violated state law and had been threatening to remove the 10 lottery terminals, which generate a substantial amount of revenue for the track.

This month, the Oregon Lottery finally did issue its declaratory ruling that Portland Meadows is, officially, in violation of Oregon gambling laws. And the lawyer for the racetrack is prepared to take the case to the Court of Appeals.

The Road to Appeals

The Oregon Lottery had been incensed for quite some time that Portland Meadows operated a poker room. The racetrack did so under the state’s social gaming law of 1973 which allows businesses and private clubs to run poker games if they did not profit from the games by traditional means, like rake and tournament fees.

In fact, numerous poker rooms have been operating in Oregon for more than a decade. All, like Portland Meadows, charge entrance fees and garner additional revenue from food and beverage sales.

Portland Meadows, however, has been a primary target of the Oregon Lottery because the track offers access to 10 gaming terminals tied to the state’s lottery system. The state benefits, but the track does, too. In 2016, for example, those 10 terminals delivered $1.83 million total revenue, $350,000 of which went to Portland Meadows as commission.

When the Oregon Lottery threatened to remove the machines in early 2017 due to track’s allegedly illegal operation of a poker room, Portland Meadows’ attorney asserted that the poker room had come into compliance with all state laws. While Oregon State Police determined the track hosted illegal poker games by acting as the bank for players in exchanging chips for money, which violated the law, Oregon Lottery Director Barry Pack gave the track one more chance to prove compliance.

As it turned out, the declaratory ruling sought by Portland Meadows was not a favorable one. It was handed down on May 21, 2018, though not reported by local media until nearly one month later.

The Oregon Lottery asserted that it could deny an application to host lottery gaming terminals if the applicant engaged in conduct which violated ORS 91.240 or violated any gambling law on a felony or misdemeanor basis “based on reasonably reliable information.”

And in the end, the Lottery determined the following:

Taking it to the Top

According to the declaratory ruling, ORI (Oregon Racing, which owns Portland Meadows) may obtain judicial review of the ruling through the Oregon Court of Appeals within 60 days of the date the ruling was served.

Will Rasmussen, an attorney for ORI, told the Willamette Week publication that Portland Meadows disagreed with the decision and planned to take it through the appeals process. The deadline for that action is the middle of July.

It is unclear if the appeals process will delay the removal of the lottery machines from Portland Meadows, or if the race track will decide to allow the poker room to continue operating.

The poker rooms in Oregon are quite popular, and their collective fate may lie in the hands of the Oregon Court of Appeals, should it accept the case. While the Oregon Lottery may not have leverage over all of the rooms, the final decision regarding Portland Meadows could set a precedent that hurts the entire state’s poker scene.