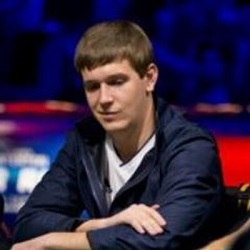 Richard Lyndaker went by the screen name “nutsinho” in online poker circles. He was a well-respected player, one who spent years at the high-stakes tables winning millions of dollars. He did very well at the live tournament tables as well.

This week, at the age of 33, the poker pro was found dead in his San Diego apartment of an overdose. The drug was one prescribed to him to help with pain from a recent soccer injury.

A friend posted the news on the Two Plus Two forums, and it has since been confirmed.

Meanwhile, the poker community has expressed sadness and shared memories of Lyndaker via social media in the past few days.

The world morns the loss of a truly beautiful person, one of the world’s greatest poker poker players, and one of the most kind-hearted people I’ve had the joy to know. I will cherish the times we had. RIP Rich Lyndaker (Nutsinho) you will be missed ? pic.twitter.com/HP0USUUo4x

Lyndaker was born and lived much of his life in New York. According to a 2014 interview he did with CardPlayer, he started playing poker during high school, just before his senior year, and competed against friends for a few dollars. The poker boom, spurred by the 2003 WSOP Main Event victory by Chris Moneymaker, inspired him to play.

When his friends began playing online at PartyPoker, Lyndaker did, too. He also began reading and participating in poker forums to improve his strategy. He also played some live poker cash games at Turning Stone in New York.

Starting at low stakes, Lyndaker improved his game online at $2-$4 stakes, then moved into six-max games and moved up in stakes. He also became friends with poker pros like Will Reynolds and Tom Marchese and learned from them. He quickly moved up to $25-$50 games and beyond.

He went on to win millions on PokerStars, and he spent some time as a poker coach on Leggo Poker and recorded training videos.

Meanwhile, Lyndaker played quite a bit of No Limit Hold’em in live tournaments as well. His first cash was recorded in 2007 but he quickly made his first final table at the 2008 WSOP when he finished second in a $5K NLHE event for more than $570K.

After numerous cashes and deep runs, Lyndaker scored his first live victory at the 2013 Heartland Poker Tour Main Event, where he won more than $122K. His last recorded live cash was in June 2018, when he finished ninth at the WSOP $10K PLO Championship event for more than $67K.

The news of Lyndaker’s death spread after an August 1 post from a “close friend who has been in touch with his hometown friends and family” on a Two Plus Two forum thread.

“Rich did somewhere between Monday July 29th and Tuesday July 30th at his apartment in San Diego of an accidental overdose (confirmed by toxicology). He was taking prescribed pills to manage pain from a recent soccer injury.

“No one outside his family and close friends know this yet. I’m posting here because, for the sake of his legacy, I want the story to be told by those who know, not by rumors.”

–“really funny and had a unique sense of humor”

–“never any hostility even if he ran awful”

–“one of the players I looked up to”

–“always great to talk to at the tables, but was always tough to battle”

–“he was a crusher, had a good attitude whether winning or losing”

–“powerhouse of a player”

–“one of the greatest minds in poker”

–“fierce competitor but always willing to laugh things off”

–“unstoppable when he was on his A game”

–“another level of poker ability and intelligence”

–“such a kind, funny person”

Many of the remembrances and notes called Lyndaker a legend.

Some friends and family members have been posting and viewing the thread, which contains some detailed stories from his life before and during poker.

so sad ! he definitely left his mark on the game

good guys. I remember some kid sitting down at 10/20/40 at bellagio several years ago, limp raising the hj vs me his first orbit and me thinking "who's this fish" as I fold. Find out later its nutsinho. He probably had 85s.

Never met in person but was a huge online presence for me. Highstakes crusher matched by an even bigger personality. Sad news. RIP