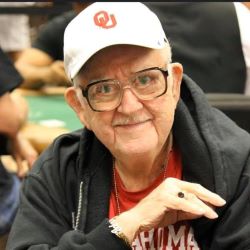 Last week, the poker world learned of the death of a longtime poker player and advocate for the game, Oklahoma Johnny Hale. He died just before Christmas at the age of 92.

That day the summit of the games elite was far off. We were two grinders, trying to close that distance. Ever so slowly. Just two fellas that loved the game.
Godspeed "Oklahoma" Johnny Hale.

CardPlayer originally reported the news that Hale passed away. It seems he died just days before that report on December 23.

The 92-year-old departed from his wife Carol, daughter Sarah, several other children and a handful of grandchildren. The family is located in Las Vegas, Nevada, where Hale lived many of his years and died.

He just celebrated his 92nd birthday on September 30.

We found no obituary in Nevada or Oklahoma.

From Veteran to Poker Pro

Hale was born on September 30, 1927 in Crowder, Oklahoma. He graduated from the University of Oklahoma in 1952 after serving in the Navy during the Korean War.

He spent his young years building homes in Tulsa County but eventually moved to Las Vegas to be closer to poker opportunities. Poker was a lifelong passion for Hale, and his tournament successes date back to 1980 on the Hendon Mob Database.

Alongside friend and poker colleague Benny Binion, Hale worked to promote and advance the World Series of Poker. As he aged, he became an outspoken advocate for seniors in poker.

Successes on the Felt

Hale had decades of poker tournament successes. He had a stellar year in 1980 at the World Series of Poker, finishing second in the $1K Limit Ace to Five Draw event and third in both the $1K Razz and $1K 7-Card Stud Hi/Lo events. For those deep runs, he was named Best All-Around Player at the WSOP that year and was awarded a bracelet for it.

He went on to make many final tables at the WSOP and in other Vegas tournaments, and he won titles in series like the Stairway to the Stars, Gold Coast Open, Triple Crown of Poker, Orleans Open, Four Queens Poker Classic, Summer Pot of Gold in Reno, and Seniors V World Championship of Poker in Temecula, California.

In the last decade of his life, he won tournaments in Pendleton, Oregon, as well as in local events like the Wynn Casino daily tournaments. In fact, his last tournament victory came in a Wynn daily in January 2016.

Throughout the years, the records show that he earned $502,240 in live tournaments alone, not reflecting any money earned in cash games.

On Hale’s 80th birthday in 2007, Hale was recognized by the state of Oklahoma as a “Favorite Son.” The certificate was the result of a motion by then-State Rep. Eric Proctor, and that citation – alongside others for past politicians and celebrities like Will Rogers – hangs in the rotunda of the Oklahoma City capital building.

To memorialize some of his favorite stories and to tell tales from his many years in poker, Hale wrote a book entitled, “The Life and Times of a Gentleman Gambler.” He also included tales in the biography about his youth in Oklahoma, war exploits in Korea, construction business success, and even back to poker home games in Tulsa in the 1960s.

In addition, Hale was successful in creating a Golden Eagle trophy for winners of the Seniors Championship at the WSOP. His was the first name on the trophy from 1995, with others listed as winners from 2001 (Jay Heimowitz) going forward.

Hale was also a proud supporter of numerous charities benefiting seniors, veterans, and families in need.

As he signed all of his autographs and memorabilia with his famous “stay lucky” catchphrase, Hale left the poker world as a fan of the game and respected member of the poker community.

“I never saw a poker player’s money that I did not like.” — Oklahoma Johnny Hale #pokerquotes https://t.co/FeBmQzM54D