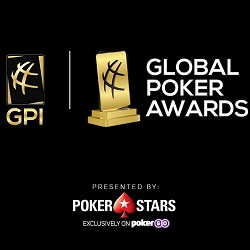 The announcement of the inaugural Global Poker Awards came less than two weeks ago. It was revealed that the American Poker Awards and European Poker Awards were being combined into one annual ceremony to be held on April 5 at the PokerGO Studios in Las Vegas.

Poker Central teamed up with the Global Poker Index to host a celebratory evening and bestow awards upon some in the poker industry. The goal is to “celebrate excellence both on and off the felt” with a “star-studded ceremony” presented by PokerStars.

It appears that anyone may attend, but for those unable to be in Las Vegas, those with PokerGO subscriptions may watch the live broadcast online.

Eleven days after the original announcement, the GPI has revealed the nominees in many of the categories up for recognition on April 5.

A huge congratulations to all the nominees, see you in Vegas – and a big thank you to the 137 Nomination Panel members who voted – we appreciate you taking the time to participate! https://t.co/kj4EtsieNC

Of the 20 categories of awards, there are 13 that now have nominees that were chosen by more than 130 nomination panel members from around the world. All awards are for performances and actions in 2018.

Steamer of the Year:

–Drew Amato for photo of Doyle Brunson at last WSOP

–Lance Bradley for book “The Pursuit of Poker Success”

–Rob Yong of Dusk Till Dawn and PartyPoker

Moment of the Year:

GPI Rankings and Other Awards

The two awards that are given based on the final 2018 Global Poker Index rankings are already known:

The other awards are a bit of a mystery. A jury of poker industry representatives is supposed to choose the winners from the list of nominees from the 13 aforementioned categories, but it is unclear as to their role or process in choosing the winners of these five awards:

Award for Lifetime Achievement in Poker

People’s Choice Award for Poker Personality of the Year

The ceremony is just weeks away, so more information should be provided before that time.

? Nominees Announced for Inaugural Global Poker Awards
? Representatives from 10 different Nations will battle it out
as 20 trophies are expected to be handed out at the #GlobalPokerAwards
? https://t.co/MUkwztecwO
Presented by @PokerStars, live on @PokerGo pic.twitter.com/IYRPxyJDmV