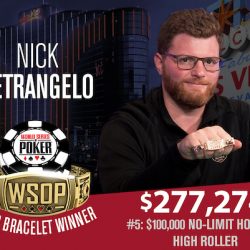 Nick Petrangelo came into the final day of the $100k High Roller as the chip leader and looked to win his second career bracelet. Standing in his way was a murderers row of high stakes pros that included Bryn Kenney, Stephen Chidwick and streaking Elio Fox.

Chidwick started as the short stack and was quickly eliminated in sixth. Bryn Kenney started the day second in chips but struggled and hit the rail in fifth. German Andreas Eiler made a strong run but fell short of the bracelet, finishing in third.

The final three players all became the first players to win $1 million or more at the 2018 WSOP. Aymon Hata scored the largest score of his poker career in this event, finishing in third for $1.24 million.

It was Nick Petrangelo and Elio Fox heads-up for the bracelet. Fox was looking to win his second of this series and take a massive lead in the Player of the Year race. However, he had to overcome more than a 3:1 chip lead from Petrangelo.

Nick Petrangelo won his second career bracelet and $2.91 in prize money. This is easily the largest live score of his poker career.

The $2,500 Mixed Triple Draw Lowball Event resumed on Monday with 12 players looking to take the first lowball bracelet of 2018. Chris Vitch started the final day as chip leader but had a tough field to contend with that included Scott Seiver, Luis Velador, Frank Kassela and Mike Leah.

Alex Simma was the final table bubble boy when he was unable to outdraw the Jack of George Trigeorgis during 2-7 Triple Draw.

At the start of the final table, Scott Seiver had almost a 2:1 chip lead over the rest of the field. Vitch started with a middle stack but could never get anything going at the final table. Vitch lost most of his remaining stack in a 2-7 Triple Draw hand against Seiver.

Vitch had patted the whole way with an eight-seven but Seiver drew to an eight-six on the last draw and left Vitch with crumbs. He busted the very next hand to finish in fourth place.

During three-handed play, Johannes Becker started catching fire during Badugi and took a 3:1 chip lead over the rest of the field. After knocking out Jesse Hamption in third, Becker had more than a 5:1 lead over Scott Seiver to start heads-up play.

It only took a few hands before Seiver was all-in. The final hand came during Badugi and both players drew two on the first draw. Afterward, Seiver moved all-in and was called.

From this point, Becker stood pat the rest of the way while Seiver drew one twice. At showdown, Becker had a Jack-five Badugi and Seiver had a three card seven. Any non-space or non-pairing card lower than a jack would give Seiver the hand.

Seiver paired his seven and that was the ballgame. Scott Seiver received $111,516 for his runner-up finish.

Johannes Becker earned his first WSOP gold bracelet in this event, winning $180,455 in the process. Becker came close last year, finishing runner-up in the $50k Poker Players Championship, but this time he broke through for his first bracelet win.

Originally, the Omaha Hi-Lo Championship was to conclude on Tuesday but an announcement was made as play reached hand-for-hand that the event will now be a four-day event. The money bubble was reached on Monday with the final 26 players receiving a payday. Pros making the money included Eli Elezra, Mike Matusow, Mike Gorondinsky, Robert Mizrachi and Dan Shak.

Meanwhile, the $1,500 Dealer’s Choice 6-Handed Event and the $565 COLOSSUS will resume with Day 2 action. The final flights of the COLOSSUS concluded on Monday and the remaining players from the six Day 1s will converge on the Rio to play 10 levels. Among the players returning is 10-time WSOP bracelet winner Phil Ivey.