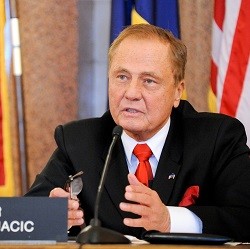 The potential for online poker legislation in New York has been looking up. Dozens of co-sponsors have been added to the Assembly bill since Assemblyman Clyde Vanel joined the effort, and the list continues to grow.

All the while, State Senator John Bonacic has been sitting on his Senate bill, the same one he has passed through his legislative body two years in a row. He pushed it through one committee already early in 2018, and he was awaiting movement from the other side before making another move.

Bonacic just through an unknown substance into the mix, however. He will not seek reelection at the end of his term this year.

After decades in office, Bonacic announced his retirement last week at the age of 75. When he leaves office at the end of this term, it will complete 20 years in the New York legislature.

He started out in 1990 in the Assembly, filling an empty seat and then being reelected to that seat four times. In 1998, he was elected to the Senate, where he has remained ever since, though he did change districts in 2002.

The Republican has been an outspoken member of the Senate, especially on gambling-related issues. He was the lead sponsor of the 2013 constitutional amendment to legalize non-tribal casinos, as well as the Upstate New York Gaming Economic Development Act and poker bill. He was also integral in the fantasy sports bill that passed and the efforts to push through a sports betting bill.

Bonacic says 20 years in office is enough, and at the age of 75, he is ready to retire and spend more time with his family.

For poker, it could be good and bad.

On the positive side, the legislation has been important to Bonacic and something he worked for years to make happen. With his retirement on the horizon, it is likely that he does not want to leave with unfinished business, especially something like poker that he passed through the Senate twice.

Bonacic’s S.3898 passed the Senate Racing, Gaming and Wagering Committee (again) in January 2018, and it is currently awaiting action in the Finance Committee. There is a good possibility that he can make that happen when he is ready to reintroduce the bill to the Senate floor for yet another vote. He has been waiting on his Assembly counterpart to do the same, as the bills have died in the Assembly in each of the past two years. But with his retirement pending, Bonacic may push as far as he can go and leave it for the other side of the legislature.

this is huge news for online poker. with interstate play, i think this will accelerate new states legalizing online poker. (hi, california and new york) https://t.co/qQnmbdOsfV

On the other hand, Bonacic is now preparing for retirement and likely has numerous issues that he wants to champion and finalize before his exit from the Senate. His focus may be scattered, especially as he may be recruited to help elect a successor in November.

The worst scenario is if the poker bill does not pass in 2018, it is unclear if there will be a sponsor for another bill going forward. And will that sponsor be as passionate about the issue? Will that person be as influential in the Senate as Bonacic?

There will be many questions to address if Bonacic retires without success.

Bonacic helped NY DFS law became a reality and has led the charge for online poker. If the latter doesn't happen this year, possibly bad news for future of online poker. https://t.co/ybahZ5y9sO

Assemblyman J. Gary Pretlow has been the lead sponsor on internet poker proposals in the Assembly for several years but without any of the success Bonacic saw on the other side. Pretlow’s A.5250 has seen troubles even getting through the proper committees and has never advanced to the floor for a vote.

Earlier this month, however, Assemblyman Clyde Vanel came aboard the poker train. As Chairman of the Assembly Internet and New Technology Committee, he had an interest in the bill and the knowledge to counter arguments it may face. While Pretlow complained about the lack of support for the bill, Vanel saw that there were dozens of potential co-sponsors who had previously shown support.

In just a couple of weeks, Vanel enlisted one multi-sponsor and 47 co-sponsors for the bill. The number is not yet enough to ensure passage of A.5250, but it makes a significant statement about the broad support for the bill. This, in addition to Vanel’s passion and interest in the bill’s success, could be enough to pass it this year.

Aside from his interest in crypto bonds, Mr. Vanel is currently "whipping the votes" for passing regulated NY online poker legislation from now until June.https://t.co/WnIbpkw7ay

The path to success is not as smooth as that, however, as the progress has slowed a bit in the past two weeks. After an initial flurry of 45 co-sponsor additions, only two new ones have been added in the last 10 days. Supporters hope this is not an indication of a significant obstacle of some sort.

The direction of the bill will likely become clearer in May. Legislators will be making moves before the summer break, and it may become clearer if the poker bill will be pushed on its own or included in a more comprehensive gambling expansion bill that will include sports betting.

Keep all eyes on New York this month, as it should let poker fans know what to expect going forward.