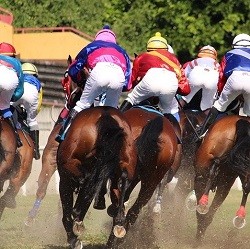 Tracks race for a piece of online gambling

The success of New Jersey online gambling has not gone unnoticed. The additional state revenue, the solid boost to casinos’ bottom lines, and the ability to get in on the start of a profitable industry has piqued the interest of others. The prime example is Pennsylvania, which legalized online poker and casino games this year.

New Jersey itself knows the success well enough to want to capitalize on it. Just days ago, State Senator Raymond Lesniak introduced legislation to expand online gambling partnerships on an international basis. The bill will allow for Atlantic City casinos to partner with entities that don’t necessarily house their servers and other equipment in Atlantic City, a requirement that has kept the state from moving forward with talks with the likes of the UK Gambling Commission. If passed, the bill will increase the liquidity possibilities for online poker and jackpot or progressive casino games, well beyond what the state is already implementing with Nevada and Delaware via the recent interstate agreement.

The state spent four years building its online gambling business. Not only has it become an example by which other states can set their standards, but it has also shown the New Jersey regulators and casino executives that more possibilities lie ahead.

And now, the race tracks of New Jersey want in on the action.

The bill in the news this week was AB.4255, which was originally proposed by State Assembly Ralph Caputo and five other members in October 2016. The synopsis read: Allows horse racetracks to be available for placing wagers at casinos in Atlantic City using internet. After a favorable vote in December 2016 by the Assembly Tourism, Gaming and Arts Committee, it sat unmoved for nearly one year.

Meanwhile, SB.2946 was introduced by State Senator Jennifer Beck on January 30, 2017. It was intended to be the companion bill to AB.4255, but it never saw any action.

The pair of bills would permit horse race tracks in New Jersey to sign agreements with Atlantic City casinos or the casino’s internet gaming affiliate to offer internet gambling for anyone in New Jersey with an online gaming account. The Division of Gaming Enforcement would have jurisdiction and set the standards for equipment used and the locations of terminals at tracks. Further, they remove jurisdiction over the online wagering from the New Jersey Racing Commission, which regulates other gambling at the tracks. The “internet cafes” at race tracks would be exempted from current law prohibiting them.

Essentially, the race tracks would act as affiliates for the casinos and be compensated for any new business they create for the online gaming websites.

Through the Assembly It Went

With little fanfare leading up to the action, the New Jersey Assembly passed AB.4255 on December 7. And that now puts SB.2946 in front of the Senate for consideration.

The Associated Press reported that Caputo pushed the bill as a way to boost the racing industry. “It would bring more traffic into the racetracks, and they need it desperately,” he said.

Speaking for Monmouth Park track, Chairman and CEO Dennis Drazin commented, “The casinos should realize that absolutely nothing will happen unless they agree to allow it through an agreement with a track. Nobody is forcing anything on them. This is really a win-win for the racing industry and the casino industry.”

With approval from the Senate committee with jurisdiction over the bill, the Senate may begin debating the bill or simply put it to a vote.

The movement of the measure so late in the year is not unprecedented but seems important to its sponsors to pass it before the end of 2017. The introduction of recent legislation by Lesniak to expand online gambling might have been the incentive needed to further push the reach of online poker and casino games. Another catalyst may have been recent revenue numbers that showed New Jersey online gambling climbing over the $200 million revenue mark and preparing to end another record-setting year of more than 20% growth.