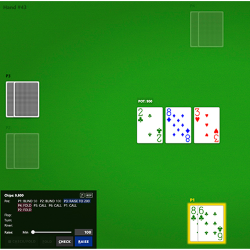 From the perspective of a person unfamiliar with the intricacies of poker – especially online poker – the game’s future may look dim.

The news from Facebook and Carnegie Mellon in July of this year told of an artificial intelligence (AI) bot created to beat a table of five poker players. This was the first time an AI bot went beyond heads-up poker superiority.

Concerns emanating from the poker community focused on people using the bot to cheat on internet poker sites. However, most large sites have already implemented tools and staff to detect and block bots.

Morgan Stanley doesn’t seem to understand how it all works. The financial services firm and investment bank reduced price targets on GVC Holdings (PartyPoker parent), The Stars Group (PokerStars parent), and Playtech (iPoker Network parent) due to the risk that AI now poses to online poker.

Not only did the analysis overreact to the AI threat, Morgan Stanley showed little faith in companies that have produced and run online poker platforms for many years.

Unless and until companies like PokerStars throw their hands up and wave the white flag to declare online poker dead to bots, the threat is being overblown.

It’s a little frustrating how most #pluribus headlines are like “WOAH a machine can now bluff humans!!!”

A #poker bot’s ability to bluff has nothing to do with “reading” human players – it’s purely a case of using maths to calculate which cards to bluff with, and how often. pic.twitter.com/tztKV2roxW

While most of the poker world was paying attention to the 2019 WSOP Main Event happening in Las Vegas, Facebook and Carnegie Mellon released the results of an experiment.

Research Scientist Noam Brown wrote the first sentence to convey what he thought was the gravity of the discovery: “Pluribus is the first AI bot capable of beating human experts in six-player no-limit Hold’em, the most widely played poker format in the world.”

Basically, the AI bot named Pluribus showed that it can handle a six-max NLHE poker game with hidden information. It used “self-play” to teach itself how to win but did not use any strategy. Pluribus was built on the knowledge used in past bots that played heads-up NLHE, as well as algorithms and code developed in the Carnegie Mellon University research lab.

The most recent issue of Science Magazine profiles Facebook AI and CMU's Pluribus bot, which beat human players for six-player Texas hold'em poker. Until Pluribus, no bot has been able to surpass people in a multi-player game. In t…https://t.co/q10aiVffoI https://t.co/j6whG9rhz0

Pluribus bots can be built with less than $150 worth of cloud computing resources.

Researchers started Pluribus playing against copies of itself without any human gameplay. As it played, it improved by determining which actions had better outcomes and using its search algorithm. The AI’s strategy was updated after each hand.

Part of Pluribus’ strategy was to consider that opponents may shift to different strategies, which means that modification of the basic strategy was constantly in play. It was the only way to approach a game like poker wherein the player competes with imperfect and incomplete information about opponents.

In collaboration with researchers from Carnegie Mellon, @facebookai has built Pluribus, the first #AI bot to win against elite professional poker players. Learn how Pluribus works — and what professional players thought of its gameplay. https://t.co/BdorfMEzcB pic.twitter.com/u2F9D1iUyz

The game, which consisted of 10,000 hands to eliminate as much of the luck factor as possible, was played over the course of 12 days. Five of the players listed competed each day, and they were awarded a share of $50,000 to “incentivize them to play their best.”

Ferguson commented that Pluribus was a very tough opponent. “It’s really hard to pin him down on any kind of hand. He’s also very good at making thin value bets on the river. He’s very good at extracting value out of his good hands.”

The other game pitted a poker pro against five versions of Pluribus, all at one table. Elias noted about the AI, “Its major strength is its ability to use mixed strategies. That’s the same thing that humans try to do. It’s a matter of execution for humans – to do this in a perfectly random way and to do so consistently. Most people just can’t.”

Some of the strategies adopted by Pluribus that proved optimal play included:

–Starting a round by betting when ending the previous betting round with a call.

–Limping is suboptimal for all players except the small blind.

While Pluribus was designed to beat the game of poker, the hope is that the technology and algorithms used will be able to be adapted to preventing fraud, conducting cybersecurity, monitoring for harmful online content – all processes that involve hidden information.

Morgan Stanley analysts evidently read the research results of Pluribus. And last week, they released a research paper of their own to show that they believe the AI poses a significant risk to the entire online poker ecosystem.

Poker is uniquely exposed to the threat of bots because it needs multiple players and is arguably a game of skill.https://t.co/exg3NdquVT

The firm noted that the bot poses a risk to professional poker players as bad players can improve with little investment. Further, if amateur players stop seeing poker as a game of skill, fewer may take the chance of playing.

Morgan Stanley analysts admitted that sites like PokerStars and PartyPoker have sectors of their companies dedicated to identifying and closing bot accounts. However, they came to the conclusion that software replicating human behavior stands to have significant impact on the game and its revenue due to a loss of player confidence overall.

According to Bloomberg, Analyst Ed young, wrote, “The (re)emergence of superhuman poker bots in the online ecosystem now appears to be a matter of when, not if.”

The price targets reduced GVC Holdings by 2% and Playtech by 4%. The Stars Group went from $17 to $18. Morgan Stanley didn’t mention 888 Holdings in its statement.

The omission of 888 indicates a lack of overall knowledge of the poker industry by Morgan Stanley, as already evidenced by the its report conclusion.