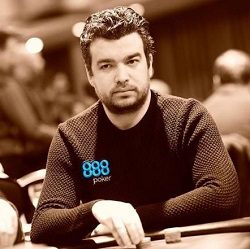 Milestones are key to keeping a poker player motivated and striving for more success. Tournament players have various methods of tracking their wins and profits, though it can be tougher to do when a player wins millions over year and years in the game.

Imagine how it must be for Chris Moorman.

Luckily, he has the help of PocketFives, where he first registered to track his online play in May 2006.

Moorman probably didn’t need PocketFives to tell him about his latest accomplishment, though the site did anyway. He knew he won his 30th Triple Crown of online poker on April 16. And he is ever closer to eclipsing the $16 million mark in lifetime online poker cashes, which could very well be his next milestone…unless he wins another Triple Crown first.

Can’t have any of these youngsters catching me up! https://t.co/67FJQX0aqW

The Triple Crown was developed by PocketFives as a way to track accomplishments in poker, beyond the traditional milestones. It became a way for players to earn a certain status in poker and achieve certain goals in their poker careers.

A Triple Crown is earned by winning three different tournaments on three different online poker networks in a seven-day period. Each tournament must be on a site tracked by PocketFives and meet these requirements:

–Must consist of at least 100 players.

Once the win is verified by PocketFives, the badge is awarded. Sometimes, celebrations abound.

Moorman’s first Triple Crown came in March 2007 when he won tournaments on Full Tilt Poker, PartyPoker, and Paradise Poker. His cumulative winnings for those three victories were $353.57.

Just last week, Moorman won his 30th Triple Crown by capturing wins on 888poker, PokerStars, and PartyPoker, earning a total of $28,007.57 to go with the crown, according to PocketFives.

That feeling when you're the ?!

He has had numerous milestones throughout his poker career, both live and online. And though his online play may have slowed due to the country in which he lives, he is still at the top of his game. And Moorman was honored for that with a PocketFives Legacy Award on April 5 at the Global Poker Awards.

Was honoured to receive the PocketFives legacy award last night at the @gpithm Global Poker Awards. It meant so much and I had a fun time at the event. Flew to Vancouver right after and ready to get back to work on the online grind.??‍? #poker #triplecrownhunting #globalpokerawards

Moorman has accumulated more than $5.6 million in live tournament earnings, with his latest final table happening in December 2018 when he finished third in the 888poker LIVE London Super High Roller tournament.

As an 888poker-sponsored pro, Moorman travels to play in special live and online tournaments. He has been in Canada recently to play the 888poker XL Blizzard online poker series, which just wrapped up on April 14.

It is likely that Moorman will be busy this summer with the World Series of Poker in Las Vegas, as well as other tournaments around Sin City from May through July. He’ll keep playing the game, and we’ll keep recording his milestones.